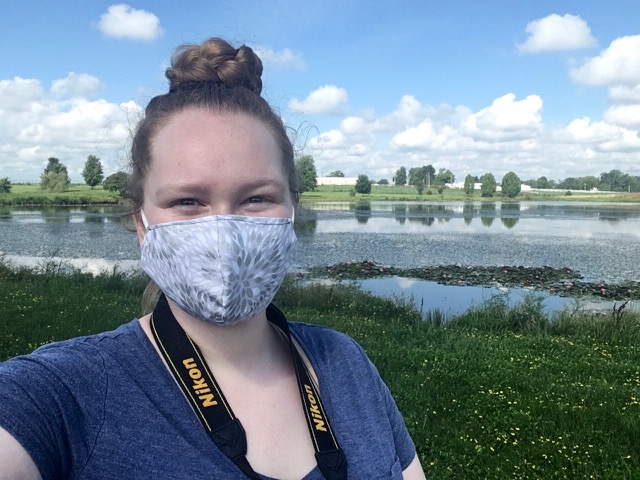 The future is intimidating and inevitable. Today is August 13.

For days now my emotions have been all over the place. One minute I’m happy and excited about going off to college and starting this next chapter in my life, then the next I feel sick to my stomach and want to cry because I feel completely unprepared and don’t want to go back to school and am worried I won’t be able to make friends. My parents keep reassuring me lots of other kids are feeling the same way, but I suppose life feels more real when it’s happening to me rather than to a theoretical other human being.

I woke up around 6:30 this morning and tossed and turned in my bed for a bit before falling back into a restless sleep. I got up for real before my first alarm went off and started my day at 8:15 a.m. I didn’t have to leave to drive to Jefferson Farm and Garden until close to 9 a.m., but I wanted to have enough time to get ready and feel awake. Dr. Noel Aloysius, an assistant professor at the University of Missouri ― Columbia (MU) had asked me to come to the site and take photos and video, even though I wasn’t sure what exactly he expected of me. For days now I’ve been trying to understand what my job entails, but so far all I’ve come up with is that I’m basically making it up as I go along.

I listened to music in Spanish on my drive to the facility, which put me in a good mood. I’d gotten there at 9:15 a.m., so I thought I’d have 15 minutes to set up the camera I’d be using and figure out how it works. That wasn’t the case because a couple minutes after Dr. Aloysius handed me the equipment, he was ready for me to start shooting. I could take pictures easily enough, but the video setting was slightly different than was I’m used to. Additionally, the camera used a side monitor to show the screen, but because of the sun’s bright glare I had trouble seeing what I was shooting.

Dr. Aloysius wanted me to take photos and videos of a drone, but when I later saw the video I’d taken I ended up only shooting the sky and not the drone because I couldn’t see where I was aiming. I also took a couple videos of his graduate students, but neither I nor them knew what the purpose of the videos was, so it was a bit of a mess. The graduate students were nice, even though my scientific knowledge is not currently advanced enough to fully comprehend what they were talking about. I tried to put them at ease for the videos, but I think I’ll end up doing a separate project later in the year that will be what Dr. Aloysius wants because at the moment I’m not sure he actually knows what that is.

I stayed at the facility for about an hour and a half taking photos and videos. The site is beautiful, and I hope I get to be out there more often. I’m pretty sure my job is more a behind the scenes position, though, so that may not be the case. When I was done, I drove back home and transferred the images and clips from the SD card onto my computer. None of my SD cards had been working for some reason, so I ended up using the one that came with the camera. I have to return it to the department we borrowed it from, so on Monday I’m supposed to do a handoff to make that happen.

Once the files were on my computer, I got to work editing together a 15 second welcome video for Dr. Aloysius. I’m now very glad I learned how to take video and use iMovie during my senior year because it came in handy. I added a couple bits of text on the video and, per Dr. Aloysius’ request, gave myself video credit. Exporting the video and sending it to him took longer than the actual editing, but in the end he was happy with the final product and that was good enough for me.

After I’d finished working, my mom and I began doing inventory of everything I’ll be bringing to my dorm with me when I move in. It seems surreal that in less than 48 hours I’ll have moved in to an entirely different place. We brought all of the various items I’ll be taking from cleaning supplies to bedding to snacks to random odds and ins. I also sorted through the clothes I want to take once again and narrowed down my selection even more. The leggings I’d picked out had come in today, and as funky as they look it’s nice to have a variety of options to choose from. I’m going to do my best to not repeat high school when I put basically no thought or effort into my appearance. I don’t intend to suddenly start being a different person, but I want to look slightly more presentable than a worn out hoodie and leggings every day, though I guess I’ll just have to wait and see how long that lasts.

A little after 2 p.m. I heated up the Mexican food I didn’t eat last night and enjoyed a late lunch with my mom. Then my parents and I watched a few episodes of Chuck before my brother came home and he and my dad played tennis together. While the boys were gone, my mom and I finished watching Avengers: End Game. I can now check it off my list of “movies I should have watched when the first came out but never got around to it.” I should probably think of a shorter title, but this one’s apt. When we finished the film, we moved on to watch Spider-Man: Far From Home. We only got half way through that movie before my dad and brother got home. My brother apparently wanted to watch it with us, though, so my mom told a small fib and said we’d just started. I’m happy to rewatch the beginning tomorrow, as long as we can see the end, too.

In the evening my family and I ate dinner together before my brother headed downstairs to watch whatever sports game he’d recorded and I tried once again unsuccessfully to enroll in my section of the Chancellor’s Leadership Class. For some reason there’s a hold on my account preventing me from enrolling in any new classes, and despite me already emailing my academic advisor to have it removed it still isn’t gone. I also have a mysterious email telling me my books have been delivered to my dorm room. The only problem with that is I’ve yet to order my books, much less ask from them to be in my room. I tried calling the MU bookstore earlier in the day but got no answer, so I’ll have to try again tomorrow. To help take my mind off everything, my family and I played a game of Spades. My brother and mom massacred my dad and me, but it was fun nonetheless.

I feel like my emotions are this whirlwind of chaos that I can’t seem to make sense of. I want to be happy but I’m also sad about everything I’ll be leaving behind. My job and the idea of starting a new set of classes is stressing me out, but at the same time I can’t wait to meet my roommate. I wish I knew what my life would look like in four years so I can know if I’m doing everything right now. I don’t want to be a Type A perfectionist, but I think it’s biological at this point. I’m going to do everything in my power to make tomorrow as fun and stress free as possible while still being productive. I want to go off to college not worrying about anything more than I already have to with a pandemic raging around me. I love my family and will miss them immensely, but I’m going to make the most of this experience.

“There is no place like home.” ― L. Frank Baum, The Wonderful Wizard of Oz

How did you spend your 149th day of social distancing? Let us know in the comments below.