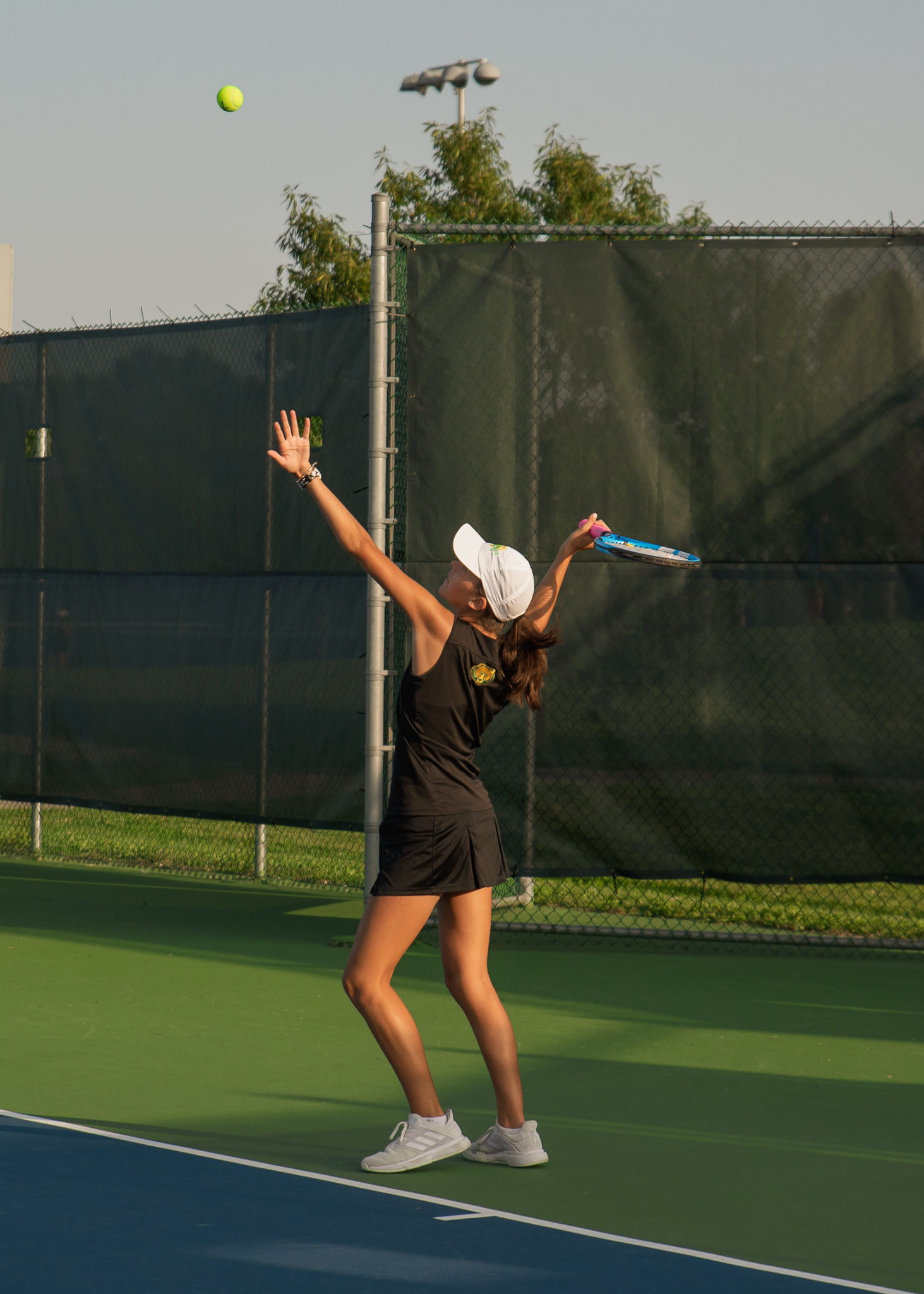 The RBHS girls’ tennis team pulled an early lead against Helias Catholic High School on Monday night, and concluded with a clean victory overall, winning eight matches and losing one. Though their varsity line-up was not solidified going into the dual, the team won all six of their singles matches and two out of three doubles matches. Several girls were rotating throughout the fifth and sixth varsity positions over the course of the season to help determine who would be the best fit. Head tennis coach Ben Loeb said the players’ potential in doubles and singles determined their eligibility to play on the varsity team.

After losing a close final round against Liberty High School in a tournament a few days earlier, the team hoped to improve upon their doubles skills and play more effectively. Winning the first round of doubles provided the girls’ momentum going into the singles matches against Helias.

Junior Abbie Sivaraman, who plays number three in the varsity line up and played number one doubles today, said she agrees that the team needs to refine their doubles capabilities, because they are already strong singles players.

“In singles, I hit out on the ball a lot and the girl’s second serve wasn’t as strong, so I was able to step up [and] hit the ball with conviction,” Sivaraman said. “In doubles, I’m not usually very into being at net, but I think I played well at net this time and tried to go for more balls that I don’t normally go for.”

Though scoring is similar in doubles and singles, the former requires more discussion between teammates. Doubles partners make decisions, such as who will serve first and who will start out by volleying at the net.

Sophomore Sriya Pokala, who is competing for the fifth and sixth spots on the varsity team and played second doubles today, said though she felt communication was one of her strong suits, she and her partner ended up losing to Helias in their match.

“Personally, I don’t think that I have done as well as I could so far in the season,” Pokala said. “To prepare for our upcoming match against Rolla, I hope to better understand different improvements I could make.”

As post season approaches, Loeb said he wants to use the emotional and physical abilities the team developed during the season to continue having victories. His goal is for the girls to win the team district tournament and become one of the four teams at the MSHSAA high school girls tennis state championships, the Final Four. He said where the players lack in skill, they make up for in effort and willingness to be coached, which levels out the playing field.

“[The girls’] are respectful and that counts for a lot in creating a journey that is enjoyable,” Loeb said. “My hope is we can make it to the Final Four. I want them to reap the reward and joy of playing on such a big stage.”

By using duals such as the matches against Helias, Sivaraman wants to enhance the team’s overall communication in preparation for the more intense matches to come. As an upperclassman, she said she has the responsibility to step up and lead where the other girls are struggling.

“I think we need to work together as a team to [say], ‘let’s go’ and cheer each other on,” Sivaraman said. “This part of the year, when we have tennis season, is always a good time to [practice] playing for each other [instead of for] ourselves.”

Will you be at the Bruins’ next match? Let us know in the comments below.