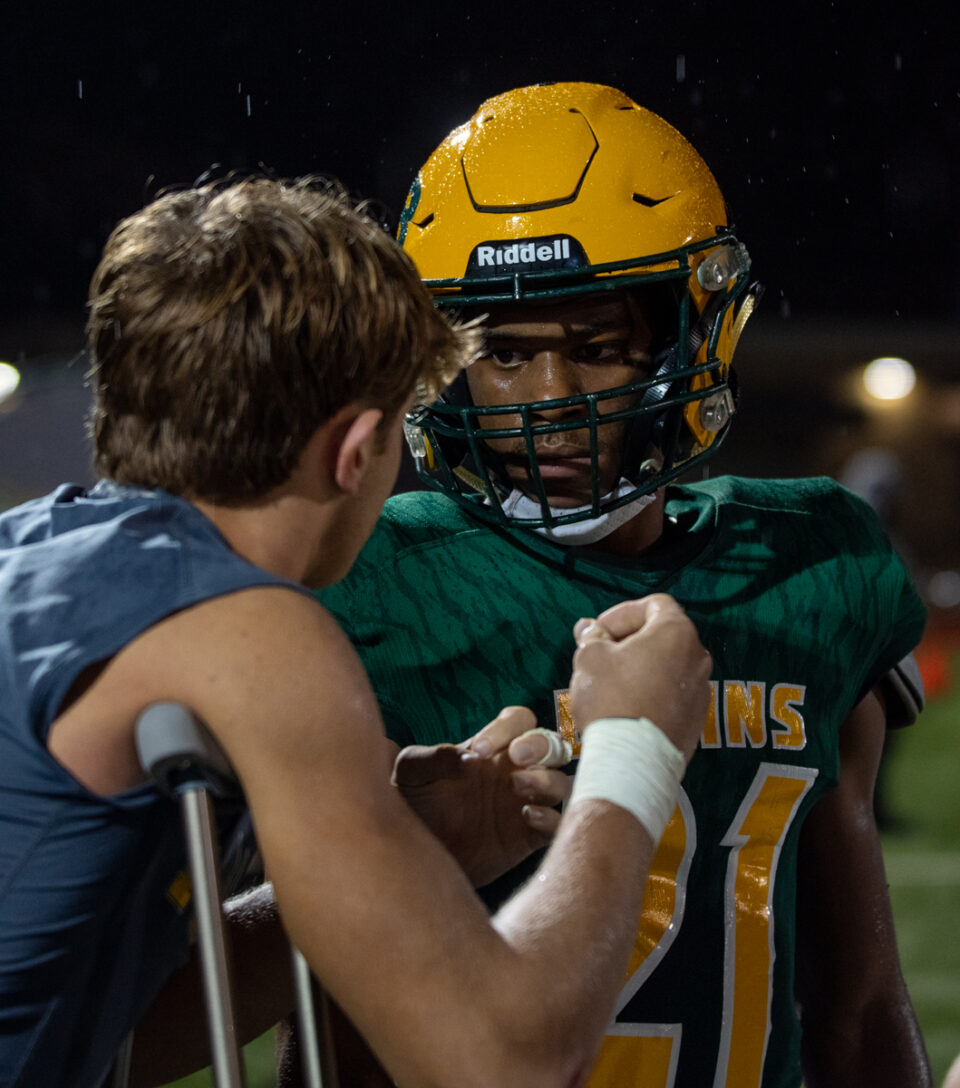 Senior Max Vanetta talks to senior Marquis McCaster during the fourth quarter at the Bruins' football game Friday, Sept. 11. Vanetta sustained an injury in the first quarter, but returned to cheer his team on later in the game. Photo by Ana Manzano.

In a game loaded with turnovers from both sides, RBHS football eventually made up for their mistakes in a 23-21 victory over the Jefferson City Jays on September 11th.

Entering the match, the Bruins were undefeated having won their two previous games, and were looking to continue that streak against a winless Jefferson City team.

Early in the first quarter, the Bruins scored first as quarterback Nathan Dent showed off his versatility after breaking away for two big runs, setting up running back Bryce Jackson for a 10-yard run and his first touchdown of the game. His second came with three minutes left in the quarter from two yards away from the endzone.

“I decided to run in the moment,” Dent said. “One of the plays broke down and the other one was more of a designed run. We definitely came into the game thinking we were gonna throw the ball, but we realized running was working, so we stuck to it.”

Each team tried to stop each other’s offensive gains, as RBHS struggled to contain Jeff City’s star wide receiver Devin White. White scored one receiving touchdown and two rushing touchdowns, one of which gave the Jays a 7-point lead early in the fourth quarter and broke the 14-14 deadlock.

After struggling to keep their footing offensively in an uneventful third quarter, the Bruins stuck to what worked for them early in the game and relied on their fast running back and hybrid quarterback to wear out the defense. Late in the fourth quarter, Dent threw to wide receiver Payton Messer for a touchdown in the red zone.

The Bruins, needing to tie the game at 21 points each, relied on kicker Jack Bower to make the extra point. The Jays called their final timeout just as RBHS was about to snap the ball to put more pressure on the kicker. The Bruins missed the extra point and were trailing by one point.

“I was super hyped up and excited after I scored because in the second and third quarter our offense wasn’t performing well,” Messer said. ”We all just expected to tie the game on the PAT. After it was blocked the sideline and all the players seemed a little down.”

Leading by a single point, the Jays needed to stall out the clock with a long drive piling up first down conversions, but they allowed Linebacker Tomissac Johnson to recover a Jays fumble and give the Bruins a second chance at victory.

“Before [the fumble] I felt like we needed to trust in ourselves to get a stop,” Johnson said. “When I saw the ball pop out I knew I could turn the game around and let our offense do what they do best, go down and score.”

“ we needed to trust in ourselves to get a stop.”

With four minutes left in the game and the Jays using up their last timeout in the previous drive, all the Bruins needed to do was chew the clock with their run game and kick a field goal with little time remaining. The running game between Jackson, Dent, and an excelling high tempo offensive line proved to be too oppressive for the Jays to handle as their defense continued to let big runs through their defensive line, and with seconds left on the clock, Bower set up for a game-winning field goal.

As the Bruins prepared to snap the ball, the referee blew the whistle and stopped the play because of an RBHS false start, turning a 22-yard field goal attempt into a 27-yard FGA. Regardless, Bower made up for the missed PAT earlier and converted the field goal giving the Bruins a two-point lead. Safety Hudson Gibbs put the game away after an interception with less than ten seconds left on the clock.

“I was super nervous [kicking the field goal], but I had to put the other kicks behind me,” Bower said. “After it went in the entire team went crazy, I couldn’t have done it without my long snapper [Lake Reid] and holder [Gavin Samuel].”

Junior Parker Boone is a photographer and multimedia contributor for Bearing News. He is a trainer for the RBHS rowing team and a member of Student Coalition and Young Democrats. In his free time he is a competitive boulderer and enjoys watching B movies.