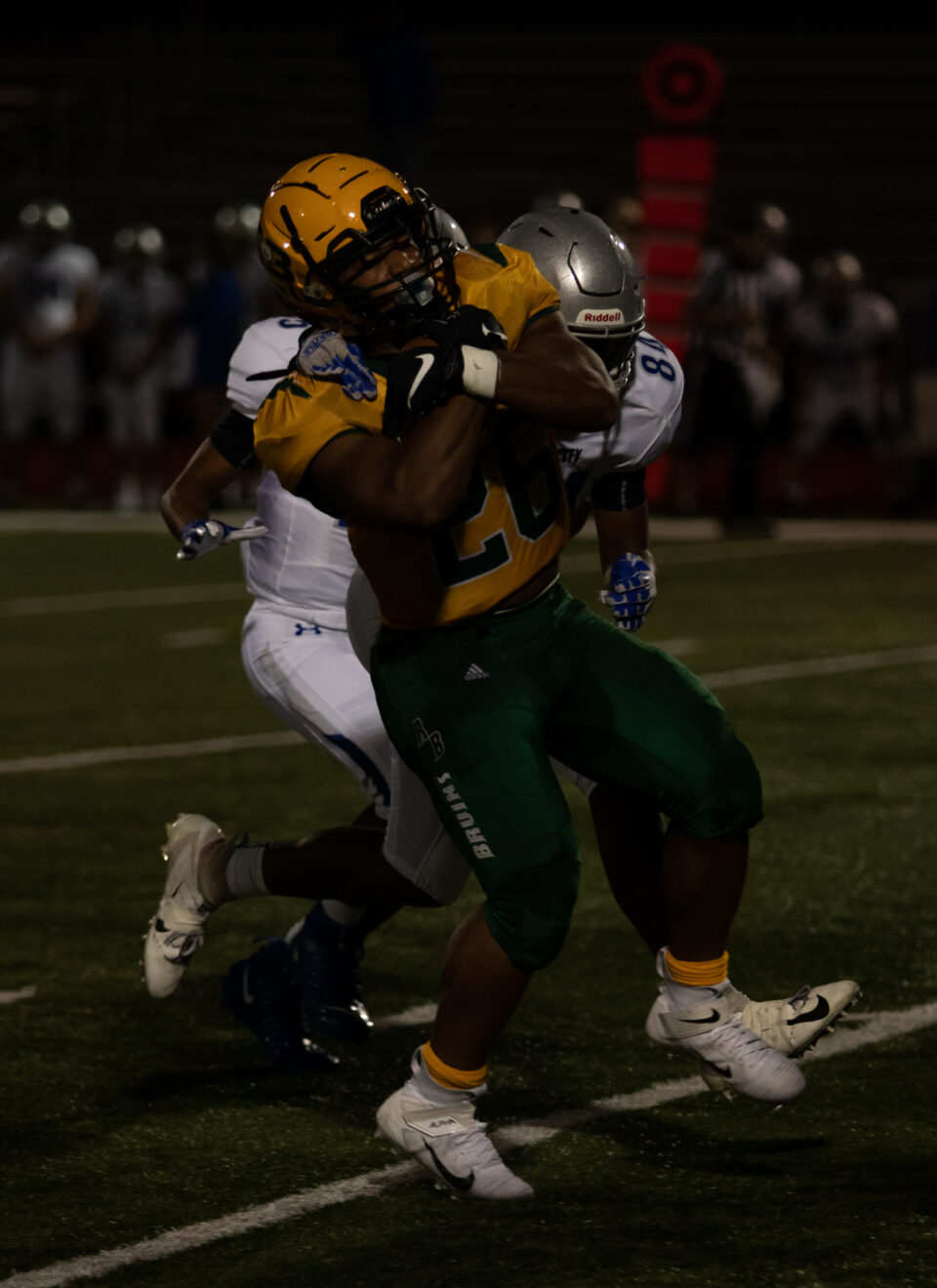 Senior Bryce Jackson breaks a tackle from two Capital City Defenders on his third touchdown of the game Sep 17. Photo by Parker Boone

The bruins football team won a high scoring game against the Capital City Cavaliers Sept. 18. They played on an unusually empty field, on an atypically cool night, against a team they had never faced in school history. Nothing was normal about his game, and the Bruins had no way to prepare for the rollercoaster of events that occurred when they won against the Capital City High School (CCHS) Cavaliers 76-49.

The game started with a mistake, the first of many that would lead CCHS to lose. RBHS senior running back Bryce Jackson forced a turnover 40 seconds into the first quarter and scored a touchdown. Toward the end of the quarter, CCHS had a turnover and scored a touchdown, tying the score. Junior Peyton Messer said he thinks this mistake, and other like it, were the result of the team’s relative inexperience.

“I think the mistakes happen sometimes because we are a really young team, and we can make sure these mistakes stop happening by working hard during practice and staying focused all the time,” junior Payton Messer said. “Our most dangerous opponent is ourselves.”

“ Our most dangerous opponent is ourselves.”

Ten seconds into the second quarter, RBHS made another crucial mistake. The Cavaliers ended the Bruins’ possession early with a turnover, and scored two minutes later. The team recovered however, and scored off a 10-yard pass by junior quarterback Nathan Dent to sophomore wide receiver Mark Hajicek. The score was 28-20 going into the second half, Senior Marquis McCaster contributed the lead to the team’s offensive performance.

“The defense definitely underperformed while the offense played a great game, ” senior cornerback Marquis McCaster said. “All together we played well enough to win”

The RBHS football team wasn’t able to widen the point gap in the third quarter, but still stayed in the lead. Both teams scored 21 points, and the fourth quarter began 49-41 in favor of the Bruins.

Almost one minute apart, RBHS scored twice, putting them at a 19 point lead. Widening the gap even further, Jackson scored his fourth touchdown of the night. After that, the game had practically ended. The Cavaliers scored a touchdown with 4 minutes left, but it wasn’t enough to recover completely, and the game ended with a Bruins victory, putting the RBHS football record for this season at 4-0.

“This season has been a lot of fun because it is pretty hard to go 4-0 in our class,” Messer said. “We have really come together as a team this season and everyone has bought in to what [Coach Van Vanatta] has for us.”

Do you think this is the highest scoring game RBHS has ever played? Let us know in the comments below![/vc_column_text][/vc_column][/vc_row]