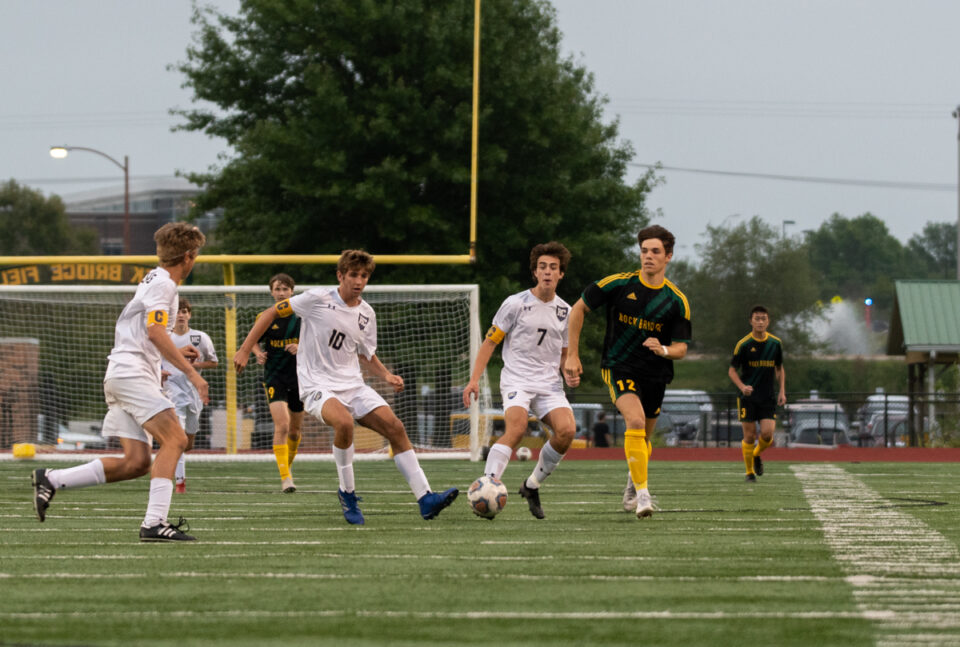 Conditions were seemingly perfect for a game of soccer on Wednesday, Sept. 9 as the boys’ soccer team took on Helias Catholic High School (HCHS). Skies were overcast so no direct sunlight obstructed the players’ vision, and there was a pleasant breeze in the air. Soon enough, the senior night formalities were over and the referee blew the starting whistle. RBHS won the senior night game 5-0.

The seniors are playing every game like it will be their last, and senior forward Aaron Vandyke is no exception. “Our goals are to play for as long as [Missouri High School Activities Association] allows us to and win as many games as possible,” Vandyke said. “and my goal is to have fun my senior season.”

Helias had the advantage at the start of the match, and the Bruins went on the defensive. But the RBHS soccer team got possession back, and the rest of the game was spent on Helias’ side of the field. Seven minutes into the first half, senior forward Jeremiah Johnson scored, and this goal was all the momentum the team needed to win the match.

The Bruins took more shots, but the Helias goalkeeper blocked every single one, until senior Mason Kirchhoefer smashed a wide open cross into the back of the net 14 minutes into the first half.

The rest of the first half was generally uneventful, with HCHS making some defensive mistakes RBHS couldn’t take advantage of. The Crusaders consistently missed marks on the defensive end, giving the Bruins some easy shots they were unable to land. Sophomore midfielder Cooper Allen says the team struggles with light performance anxiety during games.

“I feel that we struggle to just play the game how we want to play it. Oftentimes, I’ve felt the way we play in games is a lot different than how we play in practice,” Allen said. “We just need to be the best versions of ourselves that we can be.”

“We just need to be the best versions of ourselves that we can be.”

With an assist from Johnson, senior Lucas Godon scored two minutes into the second half. Godon almost put another ball in the back of the net shortly after, but missed the shot. With 25 minutes left in the second half, senior forward Wesley Goyette scored, then scored again five minutes later.

This victory put the team’s season record at 1-1, and now the boys must look to the future. Vandyke said much like other teams, the RBHS soccer team fears their season will be cut short because of COVID-19.

“I’m most excited about playing Hickman once they’re out of quarantine,” Vandyke said. “I’m most nervous that our season gets canceled before we get to beat them.”

What do you think about the Bruins’ performance? Let us know in the comments below!