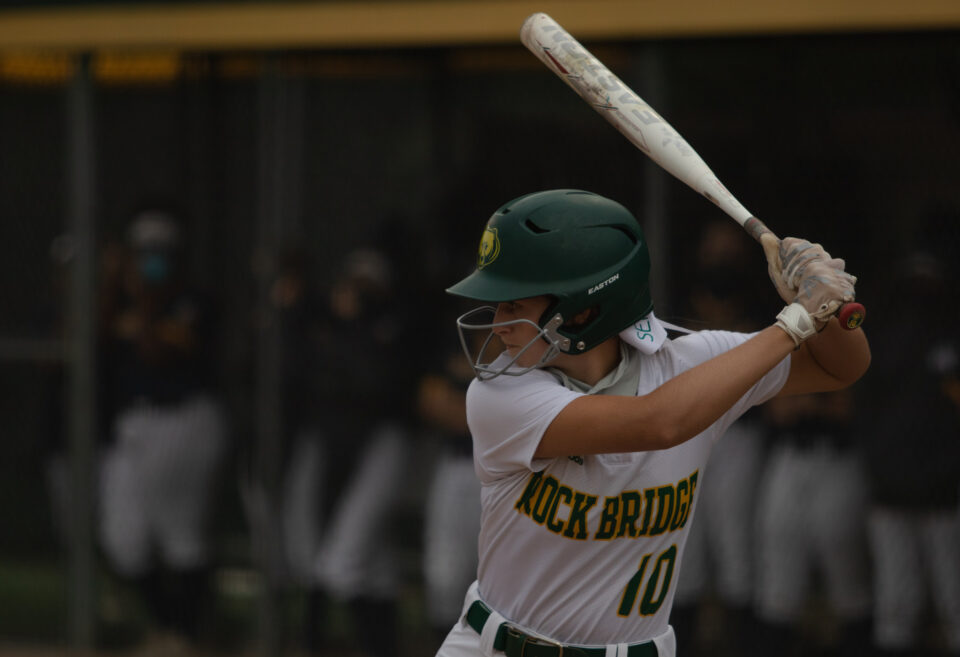 Adjusting her batting stance senior Maren Jones (P/1B) prepares to swing at the ball. Jones managed to run to batters in and score one run with one hit on the night Sep 8.”There’s certainly added pressure to get your teammates in, but I try to bring the same approach and confidence I do for any at bat.”

Going into an important regular season game  the RBHS Varsity softball team showcased their consistency against Battle High School Tuesday September 8. After just six innings, the girls won off of “run-rule”, Battle needing to surrender after being ten runs behind RBHS, after just 6 innings with a final score of 10-0.

RBHS coach Lisa Simmons had assumed the Spartans pitcher to throw the ball closer to right handed batters and farther away from left handed batters, but instead she threw the ball to the farthest side of the box from the batter regardless. Simmons had also expected the pitcher to pitch lower than she did, and as a result the team earned two scoreless innings The Bruins immediately adjusted  their batting strategy after the second inning which led to a six runs in the third.

“Our hitters did a tremendous job laying off borderline pitches,” Simmons said. “I felt we had a very mature approach at the plate, and to be able to make game adjustments that quickly speaks volumes to that maturity at the plate.”

Freshman and RBHS utility player Cydney Fullerton hit her first ever home run on the varsity team Tuesday in the third inning,running in one other batter in the process. This run was the start of ten unanswered points scored for the Bruins.

The crowd was filled with passionate parents and RBHS alumni willing to watch their team in the midst of a pandemic. The fans being significantly smaller made cheering sporadic and their masks muffled out the yells. Regardless of this, Fullerton didn’t let the lack of a crowd presence phase them

“Even though it was a bit chilly, it was a great first home game and an awesome win for our seniors,” Fullerton said. “It was nice being able to contribute to my team by hitting my first ever varsity home run on my birthday. As soon as I hit the ball I knew it was going out and I was super pumped up.”

“It was nice being able to contribute to my team by hitting my first ever varsity home run on my birthday. As soon as I hit the ball I knew it was going out and I was super pumped up.”

As Fullerton hit the ball the RBHS crowd yelled “get that out of here” hoping for the ball to be a home run. When the ball finally left the field the cheers could be heard from the north parking lot. Fullerton’s home run was seen as the tipping point of the game to her teammate sophomore outfielder Anna Christ.

“After Cydney [Fullerton] and Abby Hay [C] scored two 2-man home runs in the same inning I was very confident we were gonna win,” Christ said. “Although most of us had that gut feeling didn’t stop grinding out more runs and keeping our foot on the gas pedal.”

After the Bruins’ commanded a strong lead in the third inning the Spartans could not recover. In three innings they scored four more runs.  The Spartans struggled to get a runner on base as pitcher Ella Showten struck out 14 batters of the 19 she faced, a no hitter performance. Down by ten points in the sixth inning, the Spartans surrendered on a mercy rule loss. Senior outfielder Jillian Larkin (OF) said she was ecstatic about the game’s effect on “team morale.”

“After a big win the team is obviously super excited,” Larkin said. “We also bonded really well because we knew we accomplished it together as a team.”

What were your thoughts on the game? Let us know in the comments below.

Junior Parker Boone is a photographer and multimedia contributor for Bearing News. He is a trainer for the RBHS rowing team and a member of Student Coalition and Young Democrats. In his free time he is a competitive boulderer and enjoys watching B movies.