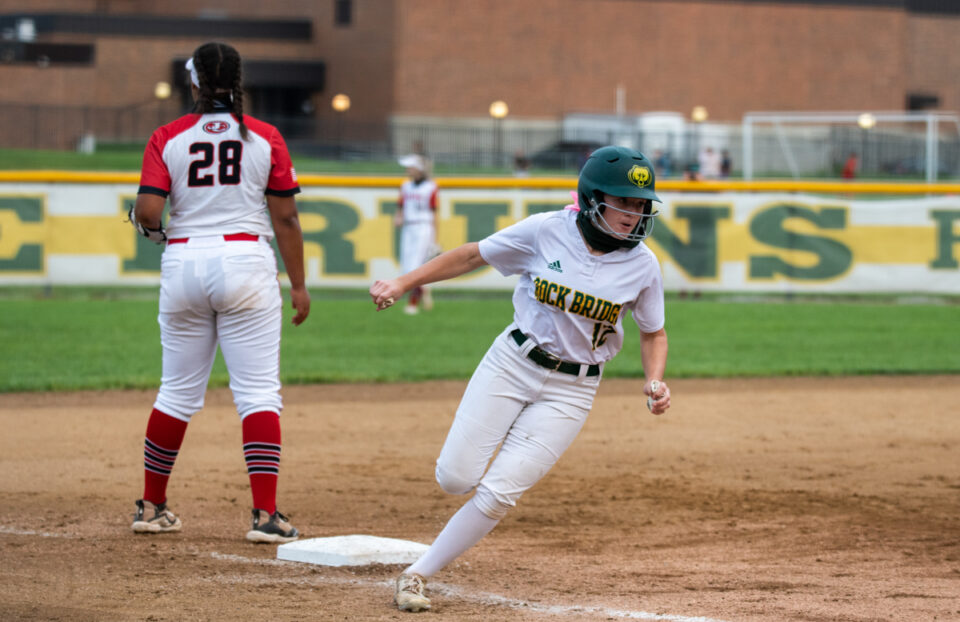 In a fast one-sided game the Bruins softball team took on Jefferson City in a five inning game where RBHS took the win 10-0, September 15.

In the first three innings of the game, both teams struggled to get any runs while at bat. Early in the first Sophomore Anna Christ managed to hit a single, but it was followed by three outs, “ending the inning. In the second inning, senior Maren Jones walked onto first base after the opposing pitcher threw four balls. Three more outs followed Jones’ at bat. Afterwards, she reflected on the team’s slow first few innings

“I think we’re always much more confident in your second time on the plate”, “Jones said. “You’ve seen the pitcher, you know what she’s got as far as speed and off speed [her pitches] you’re settling into the flow of the game. But our goal is always to get our offensive going right away.”

Midway through the game, the momentum shifted in the Bruins favor, as RBHS got a 5-point inning in the fourth. Senior Pitcher Ella Schouten hit the ball far in the outfield which allowed for her teammate to run into home for the second point of the inning. This was followed by three more runs batted in (RBI). Schouten was one of three batters to score points for their team and reviewed their hitters’ performance.

“Our bats are big right now which is great, “Schouten said. “We’re playing very consistently right now. We always say the season is a marathon not a sprint”, so consistency is key.”

The Bruins closed out the game in the fifth inning with five more consecutive runs. Senior Jillian Larkin commented on their fast paced inning after scoring one of the runs leading to an RBHS win.

“It takes everyone one time through so our first innings are generally us testing the waters,” Larkin said. “Hits are contagious. Once a person gets a hit, more are going to follow, and the runs added up super quickly.”

After the blowout, Schouten said she and her teammates celebrated the victory and thought about the future of their season. She said they have high hopes and plan on ascending past what last years team accomplished

“This was a great win for the team,” Schouten said. “It continues to build our confidence as a team and gets us one step closer to a district championship.”