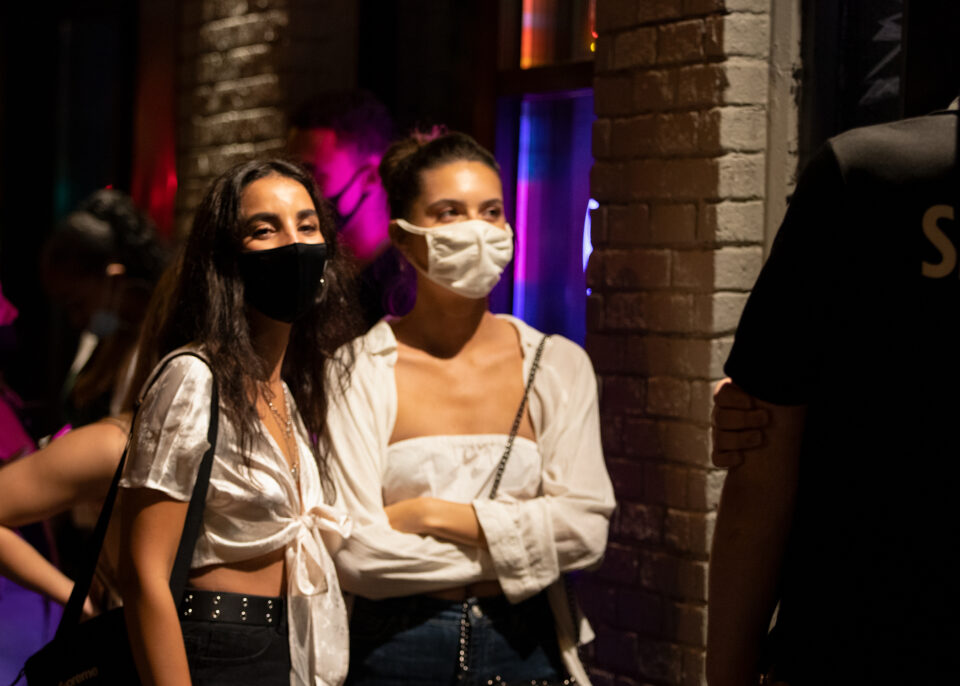 Two students at the university of Missouri wait in line to enter Silverball Arcade and Bar late at night on Friday Sept 25. Photo by Parker Boone.

A two-week COVID-19 study published by Columbia Public Schools (CPS) reports case rates were on a steady incline from Aug. 24, the first day of the academic semester at the University of Missouri—Columbia (MU), until Sept. 7, when cases in Columbia peaked at 91. Although cases are declining and the case rate is now low enough for CPS to consider a return to hybrid classes, MU’s lack of effort to provide an open and safe campus will continue to burden CPS students, as MU’s case rate is unpredictable. If MU can’t handle moving students in safely during a pandemic,, then they certainly can’t handle holding in-person classes during a pandemic, it’s time Mizzou administrators take responsibility for the inexcusable failure to protect their students, as well as citizens of Columbia, and effectively end in-person classes and send students home.

MU currently has 69 active cases and 1585 total cases. Compared to the University of North Carolina—Chapel Hill, which shut down after reporting that 130 students tested positive for COVID-19 in the first week, MU is setting a bad precedent for the rest of the nation’s colleges.

Many of these cases were preventable by restricting on-campus parties or mandating a quarantine when students first moved in — MU did neither of these when their campus first opened. In fact, greek life activities were only suspended after MU reported 159 cases on the first day. If MU administration properly implemented precautions, hundreds of students would be COVID-19-free.

If MU administration properly implemented precautions, hundreds of students would be COVID-19-free.

Although MU administration is at-large to blame, university chancellor Mun Choi bears a heavy burden in solving this problem. On Sept. 10, Choi blocked several students on Twitter who criticized his handling of the case surge; unblocking them only after students threatened a lawsuit, citing violation of free speech. Choi’s childish actions on Twitter only further emphasize his lack of executive action in handling catastrophic scenarios like this.

On top of letting Choi run rampant on Twitter, MU also chooses to end it’s semester in-person on Dec. 18. Other campuses, such as the University of South Carolina, made the right decision to end in-person classes after Thanksgiving break and transition to remote learning for the rest of the semester. This poses a significantly high risk to both the campus and the city, as students travelling across the country will lead to higher chances of case spread.

At the time MU students moved in, Aug. 15, CPS planned on students coming to in-person classes on a hybrid, 4×4 schedule, but because COVID-19 case rates shot up the following week,  CPS administration was forced to transition to an all-virtual curriculum for the beginning of the fall semester. All students, kindergarten through 12th grade, must learn from the confines of their homes, attending up to seven hours of virtual learning a day. MU’s lack of policy harms CPS students far more than those on university grounds. Parents of elementary students may now have to worry whether their child is doing well at home, and high school students dread their descent to their computers every morning for first block classes. Granted, sending college students to remote learning is a catastrophe in itself as students are more prone to cheat on exams or get a lower-quality education, it is imperative CPS is able to send at least elementary school back. Kindergarteners certainly can’t learn from home and it is vital they build core educational values so they are better prepared as learners for the rest of their academic careers. College students should be able to adapt, kindergarteners shouldn’t have to face that burden.

On top of countless missed opportunities to mitigate case spread throughout campus, the City of Columbia has fallen short in stopping case spread. Columbia made the right decision enforcing a mask mandate on July 10, a rule that was already in place in many parts of the county; however, Columbia continues to keep bars and clubs open, only closing them after 10 p.m. and prohibiting alcohol consumption after 9 p.m.

The latter point brings up a single question — does Columbia know COVID-19 can spread before 10 p.m.? COVID-19 can spread just as easily when the sun is out  — closing bars at 10 does nothing but flood city streets earlier. If the City of Columbia truly wanted to take effective actions toward slowing the spread, bars could operate at a significantly smaller capacity, or closed entirely at the same time MU conducted a quarantine when students moved in. Bars like Willie’s have closed because of their negligence in following COVID-19 guidelines. It’s only a matter of time before the other bars downtown are closed as well.

Obviously, MU can’t undo the mistakes they’ve already made, but they need to take responsibility for the problem they’ve created. If Choi and MU administration care about the good and health of the locals in Columbia, all in-person events and classes should be effectively discontinued and students should be removed from on-campus housing immediately.

Should Mizzou students be sent home? Let us know in the comments below.