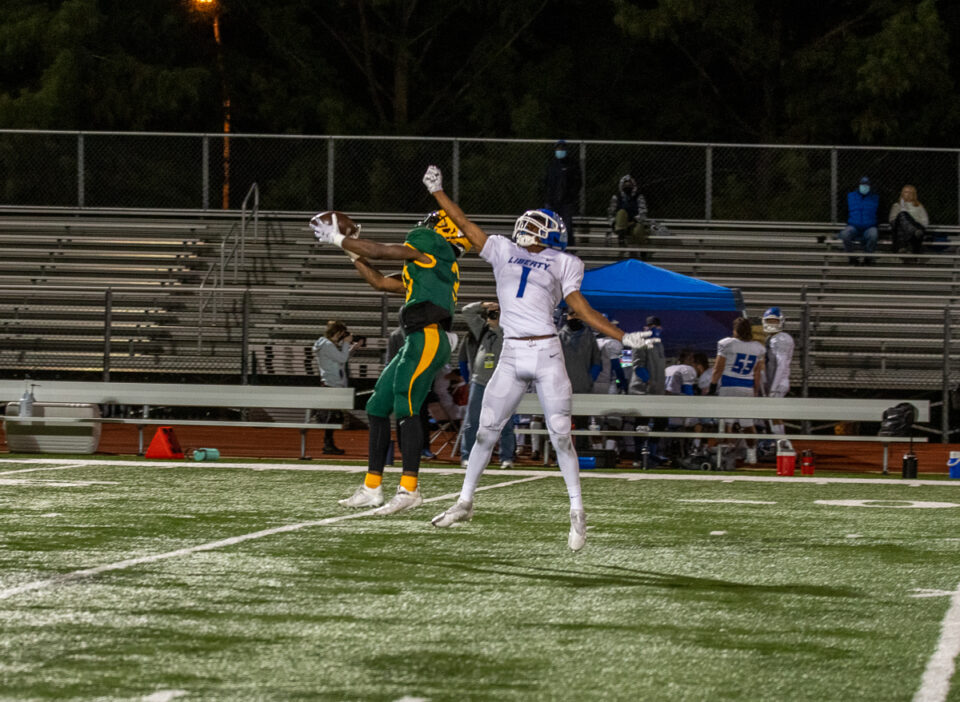 On the first Friday football game of October, the Bruins walked onto the chilly field for an expectedly contested home game against the undefeated Liberty High School Blue Jays (LHS). With the odds questionable, the Bruins fought their best but ultimately lost against the Blue Jays in a game sprinkled with minor but unfixable mistakes.

Seconds into the first quarter, LHS challenged the Bruins with a touchdown.

The Bruins started the game in a tight spot, as junior quarterback Nathan Dent and senior running back Bryce Jackson repeatedly tried to start Jackson’s running game, but LHS had already started a rushing tactic.The consistent use of the offensive line by Liberty set up additional struggles. The end of the first quarter finished with LHS leading with a score of 14-0.

RBHS head coach Van Vanetta said that the team made errors early in the game. These were hard to fix later as Liberty had the advantage of a strong offense.

“We didn’t come to play in the first quarter and made some mistakes that Liberty was able to capitalize [on],” Vanatta said. “We have to learn to play to a complete game.”

“We are 4-2 and have done a lot of good things. The key is to enjoy the moment.”

Sophomore kicker Jack Bower said the game could have gone better if RBHS had fixed little errors to try to catch up with the Blue Jays. He is intent, however, on the team pulling through the rest of the season.

“If we cleaned up, then the game could’ve been a lot closer … just the way we reacted and responded to the mistakes could’ve been better,” Bower said. “I think our goals are to just win out. We have two Columbia school opponents coming up, so two wins would be big.”

In the end, RBHS wasn’t able to maneuver around Liberty’s tactics and lost 52-28. Their next game is Friday, Oct. 9 against the Battle High School Spartans.

How do you think the rest of the season will play out for the Bruins? Let us know in the comments below.

Senior Nora Crutcher-McGowan is one of two Editors-in-Chief for Southpaw and Bearing News. In her free time, she enjoys watching movies, finding swimming holes and listening to music.