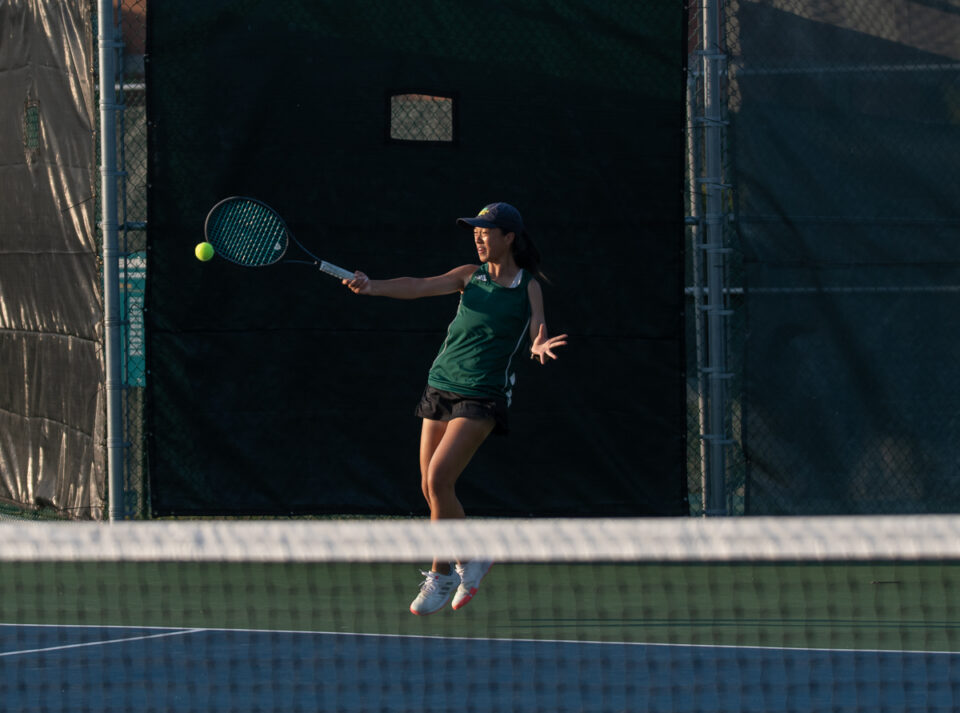 The RBHS girls’ tennis team won their 22nd consecutive district dual against Jefferson City High School (JCHS) Thursday evening and celebrated senior night together afterwards. This victory marked their last hurdle to reaching the sectionals dual, which the Bruins will play at home against Timberland High School on Monday. If the team wins on Monday, they will be eligible for the MSHSAA state tournament on Oct. 23. Junior Abbie Sivaraman, the number three player on the varsity team, played number three singles and number two doubles.

“I honestly didn’t realize that it was the 22nd consecutive one. I think sometimes we take wins like this for granted, so it just felt like another districts, but I’m proud of the team,” Sivaraman said. “I think a win like this gives us some momentum for the rest of postseason.”

The Bruins played to clinch yesterday, meaning they ceased all matches in progress once they won five out of the possible nine matches. They won at first and second doubles, as well as at second, third and fourth singles.

“It can be hard to close out a match. You cannot run out the clock in tennis like you can in many other sports. It can be tough.”

“The key point that stood out was taking a 2-0 lead in doubles,” coach Ben Loeb said. “At that point we had momentum and we were in control of the dual.”

Loeb said most high school teams play better singles than doubles, and RBHS needs to take advantage of this fact. He said he is looking for the team to improve in this area, particularly in third doubles, which had a 7-4 lead and lost 9-7 to JCHS.

“We made too many errors down the stretch,” Loeb said. “It can be hard to close out a match. You cannot run out the clock in tennis like you can in many other sports. It can be tough.”

Sophomore Kinley Schade played third doubles with sophomore Sriya Pokala. She said this was a tough match because she and her partner went back and forth against the JCHS players on deuce points a few times, and she was too tentative with her serve.

“It’s really easy to get stuck in a pattern of winning a point and then losing a point over and over again,” Schade said, “and so when you have to win by two, it can sometimes be difficult to power through and win the two points in a row.”

“It’s always sad to think of the seniors leaving because of all we’ve been through together, on and off the court.”

After the five winning matches concluded, the Bruins regrouped to honor seniors Josie Fish and Sarah Ding with posters made by the junior players, food and a speech from Loeb. He said he was glad the team could celebrate the seniors after a big win, and Sivaraman said she will miss them.

“I love senior night. I’ve only been a part of two other ones, but they were fun to put together and celebrate the seniors,” Sivaraman said. “It’s always sad to think of the seniors leaving because of all we’ve been through together, on and off the court.”

Looking ahead, Sivaraman said the team has a lot on the line for their future matches, but they are well-prepared after playing under pressure many times throughout the season. The Bruins will have two more practices to prepare and reevaluate their strategies and techniques before the sectionals dual. But for now, Loeb said they can celebrate their big win.

“It’s quite an accomplishment for our tennis teams, past and present, to have a streak like this,” Loeb said. “Has 22 consecutive district championships ever been done by another high school team in any sport? I don’t know, but I doubt any [other] public school team has done it.”

Will you be at the girls’ tennis sectional match on Monday? Let us know in the comments below!