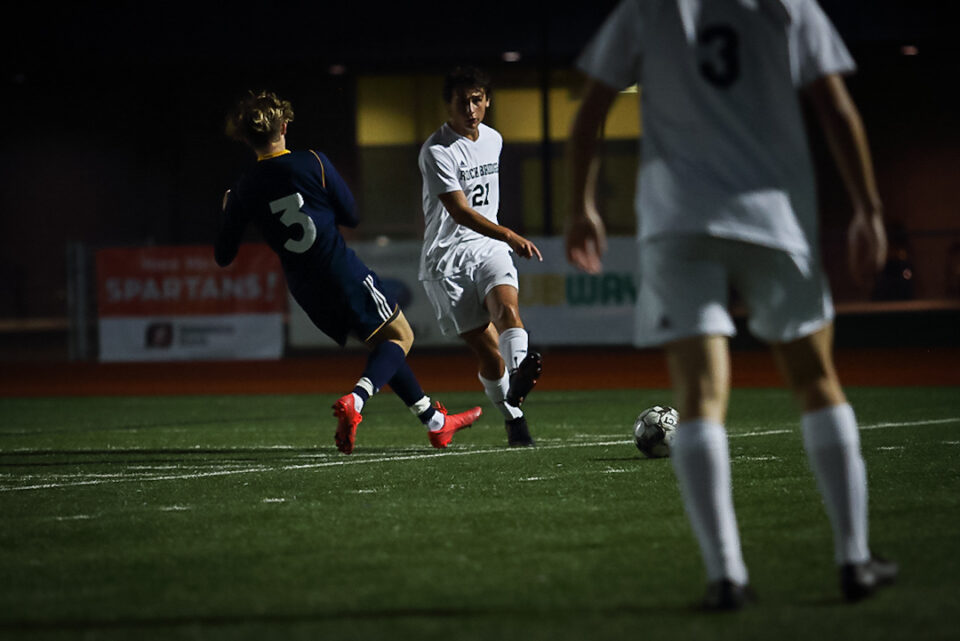 Away from their home field, the RBHS boys’ varsity soccer team played Battle High School Tuesday night Oct. 13. The Bruins wanted a win badly, said senior center-back Aaron Vandyke, and they got one, taking a flawless victory of 5-0.

“My goal in the first half was just an overall great team goal,” Godon said. “We came out really fast and attacked them right off the bat and it ended up turning into a great scoring opportunity.”

“We came out really fast and attacked them right off the bat and it ended up turning into a great scoring opportunity.”

Vandyke said the Bruins’ leading challenges were “with ourselves to stay engaged and play as hard as possible for the entire game.” Despite this, the Bruins continued to give the Spartans a tough fight, scoring two more goals before halftime. Senior forward Jeremiah Johnson made both.

“My goals came from my teammates, good passes that allowed me to just hit it right in with ease, I think what we did well is we played unselfish,” Johnson said. “I think halftime was a turning point. In the first half, we didn’t come out with the right amount of energy, even though we were scoring goals, we weren’t playing as well as we could have been. At halftime we talked about it, and we came out and did it.”

Less than one minute after the second half began, the Bruins scored their fourth goal. This time sophomore midfielder Cooper Allen took the shot. The rest of the game was contested with many shots blocked by each side’s goalkeepers. About halfway through the second half, Johnson earned his third goal of the night and secured the Bruins’ victory.

Tuesday’s win puts the team’s record at 6-6-1, their next game is against Smith-Cotton at 6:30 Thursday, Oct. 15. Godon is looking forward to the rivalry.

“Smith-Cotton is usually a good team so it’s definitely going to be a battle,” Godon said. “Coming off a 5-0 win I think all the boys are pretty pumped up so hopefully we can come out strong and get another win.”

Will the Bruins keep their win/loss ratio on the upside versus Smith-Cotton? Let us know in the comments below!

Board of Education votes to keep middle and high school virtual, elementary to return Oct. 19

Junior Desmond Kisida is a photographer and artist for Bearing News. He is also the secretary for RBHS Young Democrats. He enjoys taking and editing photos, creating graphic designs, listening to and playing music, and drinking coffee.