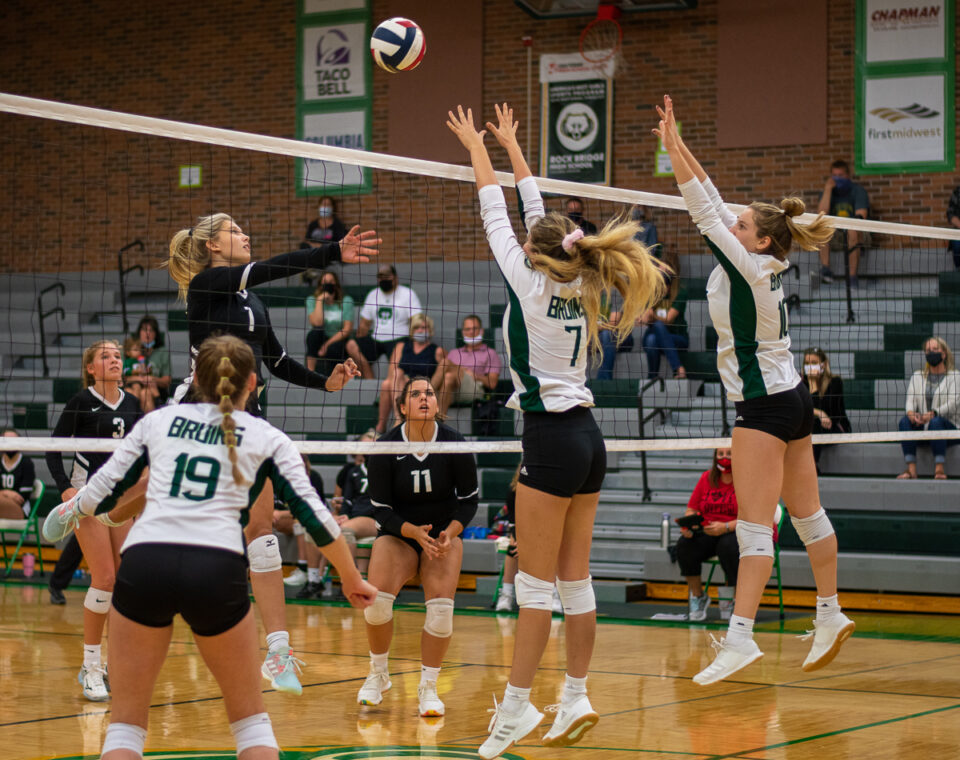 The RBHS JV volleyball team stepped off the court after winning their game, and the varsity team quickly replaced them. As music blasted through the speakers the girls did their pregame dance, and warmups began. RBHS won their game against Hannibal High School (HHS) in straight sets on Thursday, Oct. 8.

RBHS started the game strong. Blockers, spikers, defenders and setters all did their part, and not one field of play had to compensate for the mistakes of another. This true synergy didn’t seem to stop after the first set. Defenders like senior Abigail Frerking made this possible.

“Last game I think we did a really good job of starting out strong and keeping that same level of intensity [and] energy for the entire game,” Frerking said. “As for things we need to improve upon, I don’t think there was any specific type of error that stood out among the rest, but we can always work on limiting our errors in general.”

This cooperation led RBHS to an early lead, junior Ketti Horton blocked an HHS spike on set point, and the first part of the game finished.

Because the defense created confidence for the team in the first set, spikers had an advantage in the second set. Offensive players like senior outside hitter Emma Roush and sophomore setter Ella Swindle had the chance to make impactful plays.

“We all know what our job is and what we need to do to accomplish our goal,” Roush said. “For these last couple of games it’s important that we stay focused and work hard as we get closer to the postseason.”

By the third set, the RBHS volleyball team had settled into the groove of the game. The chemistry the team established at the start didn’t seem to fizzle out.  Despite this wide 10 point gap, the Bruins continued their performance, and the crowd had the opportunity to watch great volleyball plays, like when Swindle blocked a spike, then ran to the other side of the court to successfully block another.

“I think what we did well was not playing down, we came out and took care of business,” head coach Nicole Murphy said. “I think that mindset of coming in and getting our jobs done is going to help us moving forward.”

The team’s record is 14-1-1, and with only five non-tournament games left in the season against teams like Hickman High School, Battle High School and Blair Oaks High School, the team has a hard road ahead of them. As the team looks to this homestretch into the postseason, they  said they are confident in their abilities.

“I know there will be a little bit of nervousness as we get closer to postseason just because the stakes are higher and we all want to do really well,” Frerking said. “But overall, I think we’re feeling good. We’ve been working really hard and are excited to see how far we can go.”