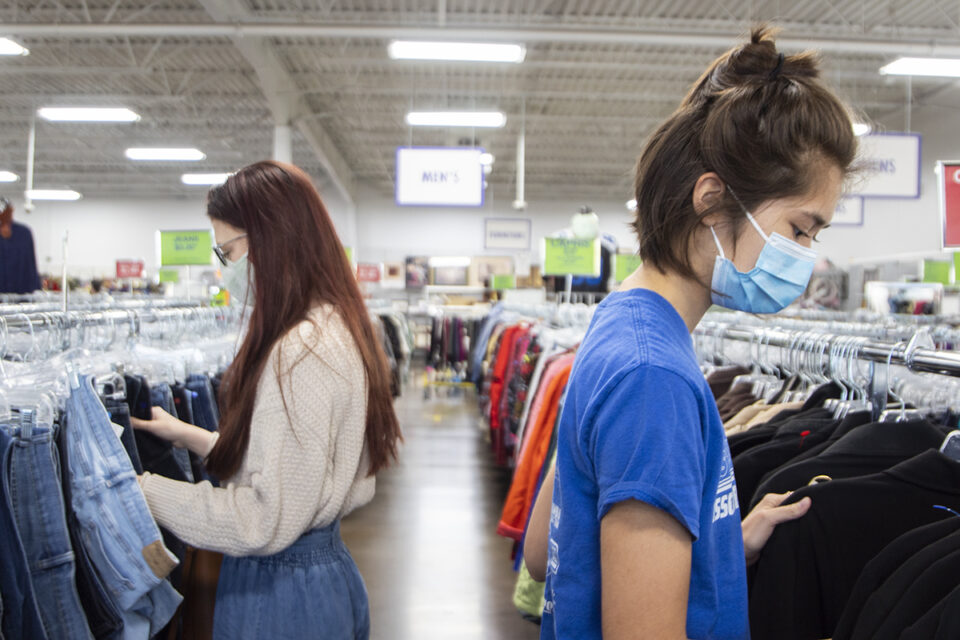 In recent years, the sustainable fashion movement has been on the rise in response to ‘fast fashion.’ This term, which the New York Times first coined, is used to describe fashion associated with popular brands like H&M, Forever 21 and Zara as well as factories that churn out mass-produced supplies of clothing to keepup with monthly trends. These brands contribute to a multitude of environmental and ethical consequences, which have been a driving factor in consumer concerns shifting the industry towards more sustainable alternatives.

Factories for brands often associated with fast fashion rely on cheap labor, often outsourced from countries with lenient labor laws like Myanmar, where an H&M factory only paid workers $2.63 a day. Even in Los Angeles, according to investigations from the Department of Labor, 85 percent of garment factories were found to have wage violations.

Fashion sustainability is a concept Kate Fletcher, research professor of sustainability design and fashion at the University of the Arts London, describes as “fashion that fosters ecological integrity and social quality through products, practices of use and relationships.”

With secondhand clothing or thrifting, you’re bringing a second life to the clothing or extending its life, and bringing much more use and wear to it than if it was just thrown away,”

By looking at how fashion impacts the environment and creates an interconnected view of people worldwide, Jaime Mestres, academic advisor and instructor in the department of textile and apparel management at the University of Missouri, said she sees a future for sustainability within the industry.

“Investing in well made products that can last for a long time and items that […] can be reused, thrifted, etc.,” is the ultimate goal of the sustainable fashion movement, Mestres said.

There are several ways people can transition to more sustainable sources of clothing. Senior Lola Gingerich, who has been shopping at thrift stores ever since she was a child, said that she thinks teenagers in our community can make this switch to fashion sustainability through thrifting. Thrifting is an accessible source of apparel that can reduce the impact of unethical labor conditions and practices fueled by fast fashion.

“With secondhand clothing or thrifting, you’re bringing a second life to the clothing or extending its life, and bringing much more use and wear to it than if it was just thrown away,” Gingerich said.

From 2019 to 2020, sustainability-related keywords, such as “secondhand” and “upcycled fashion,” have increased by 37% in online monthly searches according to Lyst’s Consumer Fashion Report.

Through more representation in mainstream media and current trends, thrifting is becoming more accepted by the general public. Although thrifting has been an affordable alternative to fast fashion long before it became a trend, in the past, thrifters were subject to judgment and often met with the heavy stigma of inferiority associated with shopping secondhand.

“There will never be a shortage of secondhand clothes, so it’s great that thrifting has a larger audience now, but I think that we’re forgetting about low-income families who thrift because of necessity,”

“My friends in elementary school always reacted poorly when they learned where my outfit was from,” Gingerich said. “At the time, thrifting was viewed as gross and kind of shamed upon.”

Buying used clothes in the public view has gone from being taboo to trendy, and while there are many benefits to secondhand stores’ new rise in popularity, it has been a transition that has presented a whole new set of drawbacks.

“There will never be a shortage of secondhand clothes, so it’s great that thrifting has a larger audience now, but I think that we’re forgetting about low-income families who thrift because of necessity,” Gingerich said.

The trend of ‘thrift-flipping,’ or buying out the best quality items from second hand stores and reselling them on sites like Depop or Poshmark at a much higher price, raises ethical concerns. The resell economy is another factor largely contributing to the rise in cost and gentrification of thrift stores.

One of the main reasons sophomore Leah Stephen started thrifting was because it provided a much more affordable way for her to shop.

“[From] a financial view, as a high school student, thrifting is [better because it’s] way cheaper and you get more for your money,” Stephen said.

Since attracting a more universal and wealthier demographic, thrift stores have considerably marked their prices up, making their clothing less accessible to their intended market.

“Thrift stores like Goodwill have marked up prices incredibly high in proportion to their original prices […]The Goodwill in Columbia will markup anything that’s a recognizable brand, and a plain t-shirt or a pair of pants can cost you $5-$10+ now.” Gingerich said, “Complaining about $5-$10 for an item of clothing is seemingly ridiculous, but the rise in price makes a huge difference for lower-income families and people who have always relied on thrift stores.”

People [should] educate themselves on the impact fast fashion has on the environment and people. Read articles on the varying perspectives,”

Gingerich said it is essential for those in privileged positions that can choose where they shop, to consider how their purchases may affect the people who thrift stores were founded to help.

Slow fashion is another crucial part of the sustainable fashion movement, which strives to reduce waste by encouraging the production and investment in higher quality garments that can last for a long time. Mestres said that for teenagers who are able to afford the better quality clothes, slow fashion would be a great alternative to thrifting.

“People [should] educate themselves on the impact fast fashion has on the environment and people. Read articles on the varying perspectives,” Mestres said. She also encouraged opting to consume less or purchase only a few well-made staple pieces instead of supporting fast fashion brands.

Gingerich points out that while several solutions may exist within the sustainable fashion movement for people to utilize, not all are accessible to lower-income shoppers.

“Not indulging in fast fashion […] is not something everyone can commit to, which is why thrift stores exist in the first place,” Gingerich said. “I think that thrifting will always be the solid alternative option, but we need to be conscious about how much prices are rising and understand that lower incomes need to utilize the resource.”

How do you think thrifting’s rise in popularity has affected secondhand stores? Let us know in the comments below.

This is a much-needed story! I can definitely relate to the once negative attitudes toward thrifted clothing several years ago, and I think you’re right that we should remember how some people shop second hand out of necessity.