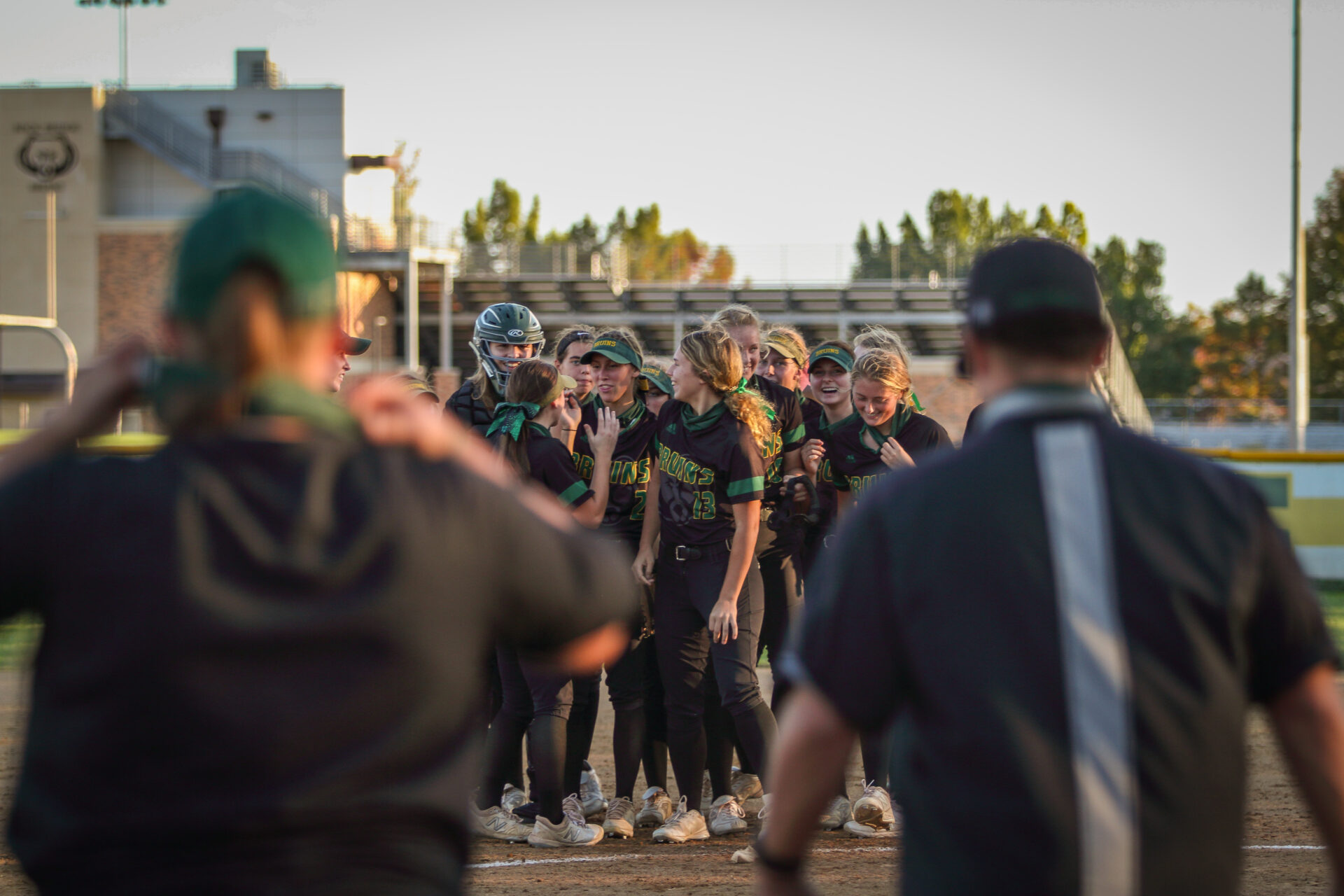 In continuation of their undefeated season, the RBHS softball team beat Marquette High School 5-1 in the semifinal round of the Missouri State High School Activities Association (MSHSAA) Class 5 state tournament. After taking a 3-1 lead by the fourth inning, the girls held Marquette at bay for the duration of the game, earning their spot in the finals on Thursday, Oct. 29. In previous years, RBHS softball has only gone to one Final Four, the semifinal and final rounds of the MSHSAA state tournament, which was in the 2019-2020 season where they lost in the semifinals and placed third. Senior second baseman Margo Frossard said winning the semifinals this year felt like redemption for their loss last year.

“The most exhilarating part of the game was getting the final out, because the game isn’t over until it’s over,” Frossard said. “Getting the final was when we knew we had made it to the state championship game and made history.”

Frossard also said while celebrating their victory, she didn’t focus on the individual moments of the game, but instead on the fact the girls had won as a team. She said this mindset was different from past seasons

“[It] feels like our success is coming from our relationship with one another and winning as a team,” Frossard said, “where in previous years we’ve only had success based on talent.”

Head coach Lisa Simmons said one of the team’s greatest strengths is valuing one another as people while working together. She said she calls for excellence in competition, but encourages the girls to have a good time while playing.

“I’m hoping our kids can take a step back and enjoy this moment, because this isn’t something common,” Simmons said. “These kids are resilient and just really do a great job of having one another’s back.”

Senior left fielder Jillian Larkin said the bond she and her teammates share is unique in how they are able to pick one another up and tackle new challenges. In this particular game, Marquette hit a home run during the third inning, bringing the count from 3-0 to 3-1. The Bruins, however, held their defense while maintaining their momentum, and scored two more times.

“I’m hoping our kids can take a step back and enjoy this moment, because this isn’t something common. These kids are resilient and just really do a great job of having one another’s back.”

Larkin said gaining the first few runs allowed the team to have a sense of mental control throughout the rest of the game. The girls also prepared psychologically before the game by relaxing to help alleviate stress.

“We go into every game with the same mentality: it’s just a normal game,” Larkin said. “No matter how important the game is, we go in with the same level-headed mentality.”

As seniors, Larkin and Frossard have experienced more years with the team than younger players. Simmons said the seniors inspire their teammates to manage their emotions and compete to the best of their abilities when on the field.

“I’m hoping our motivation comes from within and just being competitive people by nature,” Simmons said. “We have some great senior leaders [and] that helps encourage and motivate kids to do the right things.”

To prepare for the finals on Thursday, Frossard said the team will work to improve their pitching and have individuals practice batting. She said one of her goals for her last season is to strive to win through diligent training while still appreciating the ability to compete with her team.

“For me personally, I’m just trying to live in the moment and soak up every last second,” Frossard said. “This is a once-in-a-lifetime opportunity and I’m just going to try and take away the memories no matter the performance on the field.”

What do you think about the softball team’s success this season? Let us know in the comments below.

A letter to Gen Z ahead of the upcoming election