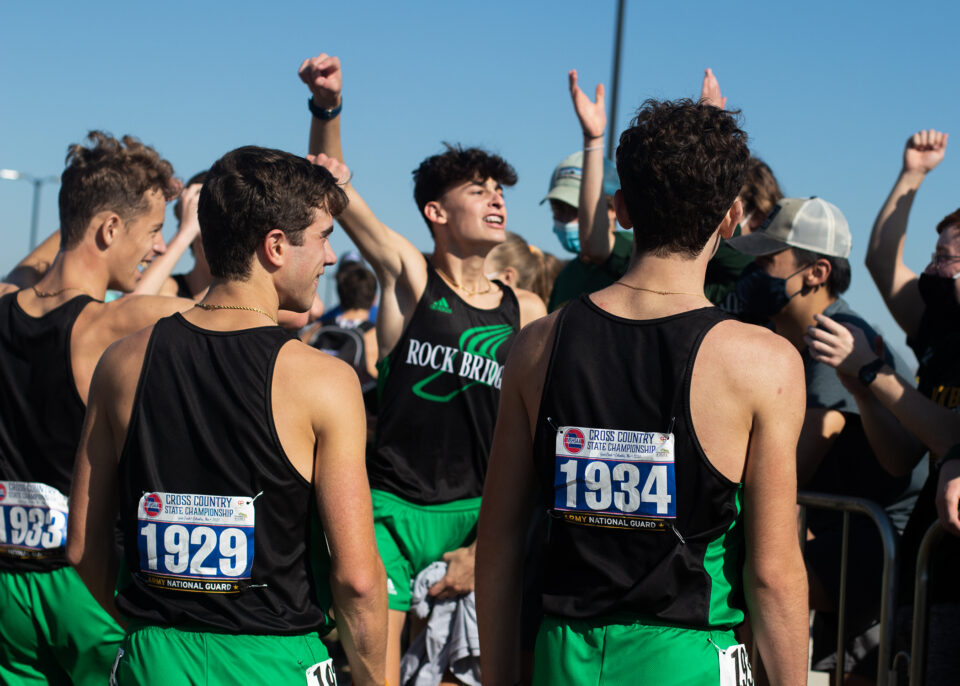 The Varsity boys cross country team celebrates with the crowd after winning the MSHAA state championship.

as the runners lined up on the grass, family members stood in marked boxes six feet apart in the grass, holding their place next to the starting and finishing lines. RBHS cross country teams participated in the Missouri State High School Activities Association (MSHSAA) Class 3 state championship at Gans Creek on Nov. 7. The girls’ team came fourth overall, and the boys’ team took home the state title for the first time in nine years, after placing third the year before. Matthew Hauser, a senior on the varsity boys’ team, also came first individually.

“After losing track season [last semester], there were for sure doubts on whether or not Cross Country would happen. All we could do was take it day by day, and train like our season was going to happen,” Hauser said. “Our goal all year was to win an individual and team title. To see that goal achieved was a special moment, and I couldn’t be happier for our team.”

Like Hauser, other seniors on the team did not know how or if the season would progress. Olivia Declue, a senior on the girls’ varsity team lineup, has been on the team for four years now. Last year, she and her team came second at state, missing first place by only three points. She is the only senior on the RBHS girls’ state team.

“Coming in [this season] ranked first in the state was very nerve-racking… confidence just didn’t match our placement so we never really ran as if we were a first place team,” DeClue said. “Last year felt more like my senior season than this one did.”

“I couldn’t be happier for our team.”

Despite the unusual season and the results for the race, Neal Blackburn, RBHS cross country coach, said he was proud of the students’ ability to succeed. Blackburn’s coaching has led to RBHS teams being a dominating presence at the state championship. He said that both teams’ goal was to use the opportunities that they had and work for the top four in the state.

“I think the seniors experienced about every possible emotion they could have,“ Blackburn said. “I think for a group of 14-18 year-old people to do what they did is nothing short of greatness on both sides.”

COVID-19 restrictions have changed the way races are held, splitting up JV and Varsity and allowing fewer runners at a time. But, despite the challenges, Blackburn said the benefits of the limitations include a learned resilience.

“…the emotional and physical toll[s have] been tough,” Blackburn said. “Oftentimes the lead-up to the pinnacle is more significant, but we have been taught by the sports world to place the utmost significance on the end result. I think for our teams to do what they did under the many challenging circumstances is an extraordinary accomplishment.”

“…what they did is nothing short of greatness on both sides.”

Hauser also mentioned without the work the team did constantly up to the day of the race, they would not have been where they were. The teams focused their energy on improving from the last championship, as they would have done regardless of COVID-19 restrictions.

“Last year we had hopes of winning the state title but didn’t execute on that day,”  Hauser said. “This year we had goals of winning, but focused on team execution, and closing the door over the second half of the race.”

With new additions on the team, like Hauser’s freshman brother Andrew, the team grew and developed against all odds. COVID-19 may have impacted social parts of the cross country season, such as pasta parties and overnight meets. But, by having masked and social-distanced practices and team meetings over Zoom, the RBHS cross country teams still preserve their community.

“Cross country is more than just running,” Declue said. “I found my family through [spending] every day with the same people.”

What do you think about the cross country teams’ season this year? Let us know in the comments below.