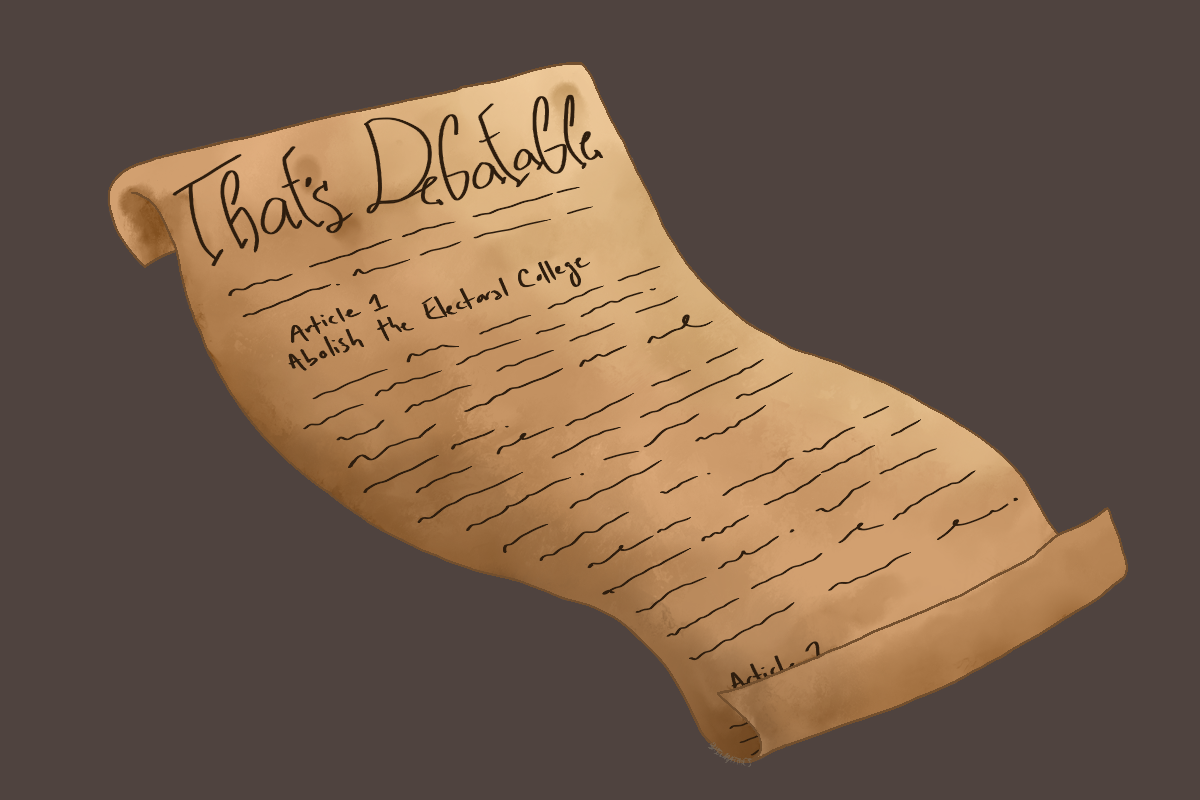 The significant divergence between the results of the popular vote and the Electoral College within recent presidential elections begs the question: why should Americans in certain states have more influence on the election than others? As the number of electoral votes is determined by the sum of House and Senate representatives for each state, it results in the votes of citizens in more densely populated states having significantly less impact than the same number of votes in more sparsely populated ones. While some may argue the Electoral College is necessary to represent the interests of all states, its winner-take-all system and over-empowerment of swing states creates discriminant influence among voters and a hindrance to our democratic ideals. In order to restore equity to our voting process, we must adapt our Constitution to meet the needs of our modern nation and abolish the Electoral College.

In our current electoral system, every state— with the exception of Maine and Nebraska— allocates all of their electoral votes to the winner of the state’s popular vote. This means that a Democrat in Missouri or a Republican in California might as well rip up their ballots because they have absolutely no influence on the presidential election. The framers of the Constitution created the Electoral College without the knowledge of the polarized two-party system to come. The time of its creation was one of idealism, and George Washington himself urged Americans to avoid party creation and division as he left the presidential office.

We have, however, devolved into entrenched two-party loyalty, a system that was unforeseen by the framers and leaves the Electoral College as a vehicle of disenfranchisement of voters who oppose the views of their state’s majority.”

We have, however, devolved into entrenched two-party loyalty, a system that was unforeseen by the framers and leaves the Electoral College as a vehicle of disenfranchisement of voters who oppose the views of their state’s majority.

The Electoral College also disproportionately empowers citizens within less densely populated states. A voter in Wyoming has more than 3.5 times more impact on the election than a voter in North Carolina. While some argue the disparity is necessary to ensure presidential candidates don’t limit their campaigning and consideration to highly populated states, the Electoral College doesn’t solve the issue of unequal focus and pandering. The Electoral College only shifts the disproportionate focus from the areas that have more Americans to states that have more influential Americans. Much of presidential campaign energy and money is spent on swing states such as Pennsylvania, Florida and Michigan. Instead of focusing on reaching the most voters, campaigns now manipulate their campaigns to best fit the needs of Americans in swing states, a principle which further disenfranchises Americans in densely populated states.

While the Electoral College disempowers voters even when operating as intended, the system’s lack of checks and balances provides no accountability for electors to respect the popular vote of the state they represent. When a citizen casts their vote for a presidential candidate, they are actually voting for which party their state’s electors will belong to. While 33 states require electors to pledge their vote to the candidate of their party, only 17 have punishments for “faithless electors,” or electors who vote against their party. In 2016, for example, 12 electors voted against their party. While faithless electors have never determined an election, creating a middle-man in the voting process who is often unbeholden to the will of the people further muddles our goal of a democratic election.Because the Electoral College is based upon outdated and uninformed ideals, disenfranchises voters based on state of origin and fails to hold its officials to the democratic ideals of American government, it must be abolished and replaced by a popular vote.

Brooking Institute article published this year predicts the 2020 general election will end in a stalemate, with each candidate receiving 269 votes. Proponents of abolishing the electoral college claim it will create a more engaging electoral process, as candidates would be more likely to visit states considered to be safety states, or places that always cast their electoral votes for the same party. However, abolishing the Electoral College inherently disregards the original intent of the framers of the Constitution. If the United States wants to continue to uphold its democratic ideals, it is imperative we continue to use the Electoral College to decide presidential elections.

At the dawn of the United States, the framers of the Constitution created two plans to establish an effective national legislature. First, the Virginia plan, which proposed each state be represented proportionately based on their population. The New Jersey plan, on the other hand, supported that each state be equally represented at a national level. The framers combined the two plans, creating bicameral bodies known as the House of Representatives and Senate, respectively.  As a result, each states’ number of House and Senate members are added up to establish the amount of electoral votes each state has in a presidential election.

“The Electoral College is the most effective way to ensure smaller states have a voice on a national level, and is a pragmatic solution to keep up with the sprawling population of the United States.”

The Electoral College plays a key role in ensuring that each state receives equal representation in the general election. Although Alaska is sparsely populated, the Electoral College reassures its citizens that their voice is heard at the national level, giving them three electoral votes. California on the other hand, a densely populated state with multiple metropolitan areas, receives 55 electoral votes to ensure their equal representation as well. The Electoral College is the most effective way to ensure smaller states have a voice on a national level, and is a pragmatic solution to keep up with the sprawling population of the United States.

On top of ensuring all states have an equal voice at the national level, each state must maintain its social contract to both its citizens and the national government by emphasizing the importance of federalism. Federalism, or the idea that states have delegated powers that uphold their sovereignty, is upheld through the Electoral College. The framers of the Constitution integrated federalism into the Constitution to ensure each state has its own autonomy and is not controlled by the federal government. The Electoral College exemplifies it. Thomas Jefferson explicitly said in the Declaration of Independence, “as Free and Independent States, they have full Power […] to do all other Acts and Things which Independent States may of right do.” Because each state is an autonomous body first and a member of the Union second, casting votes by any means other than an Electoral College violates states’ rights to autonomy and federalism.

“Abolishing the Electoral College is unconstitutional, as citizens are voting on the national level directly instead of allowing their vote to go through the state first, like how it is with the United States’ current electoral system, violating his ideas in the Declaration of Independence.”

Abolishing the Electoral College is unconstitutional, as citizens are voting on the national level directly instead of allowing their vote to go through the state first, like how it is with the United States’ current electoral system, violating his ideas in the Declaration of Independence.

The Electoral College is the most effective way to not only ensure states have an equal voice in the general election, but also ensure their  rights are upheld. If the United States wants to abolish the Electoral College, it must first establish doing so is constitutional — which it isn’t —  as well as completely restructure its presidential electoral process entirely,an impossible process in the current polarized political climate.

Do you think the Electoral College should be abolished? Let us know in the comments below.