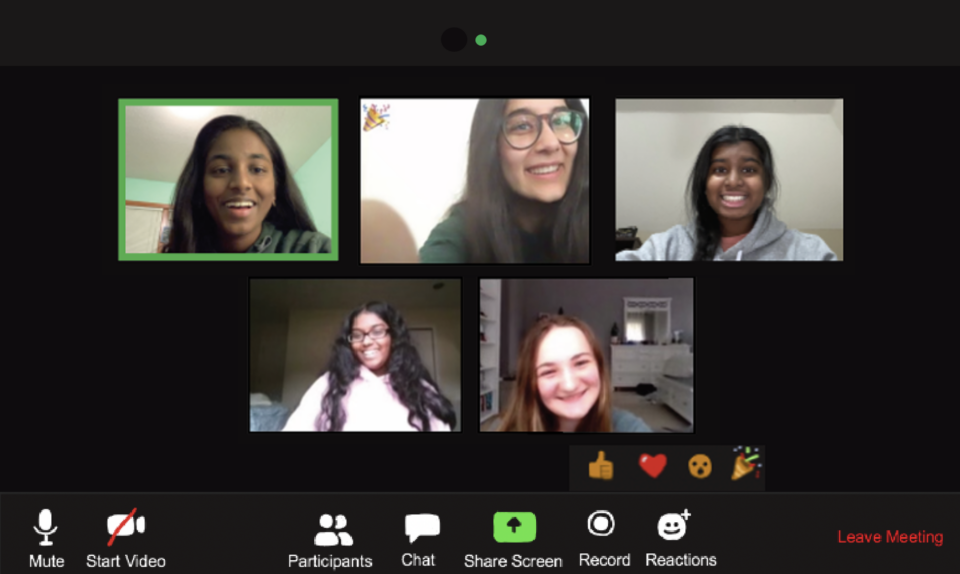 Ihave never been one to host extravagant birthday parties. The last one I can remember involved a massive, carefully constructed Barbie cake I devoured with my other five-year-old friends. I almost never celebrate my birthday with my family members, all of whom live outside of the United States. Though I always wake up to a bombardment of phone calls from relatives and well-wishers, it is rare to have them come visit me. The second I realized any birthday party I had would coincide with COVID-19 quarantine guidelines, I knew that this year’s “celebration” would be the same, if not more isolated than before. Society’s embrace of virtual platforms, however, opened our eyes to an already-existing solution to long-distance gatherings my family had not taken advantage of before the pandemic. Though video conference applications existed before the global COVID-19 outbreak, my family didn’t have time for a sit-down video call to celebrate anniversaries and birthdays. There was always the lingering notion that we would be able to visit one another over the summer or winter break to experience our share of holiday parties together. Instead, it hit me this past March that my relatives and I might not be able to see each other until the following year, if the virus was not contained.

My dad’s birthday came before mine, near the end of April. That morning we responded to a vast amount of phone calls from relatives, all quickly wishing him well and then storming us with countless questions we’d already answered all month long concerning the state-wide lockdown. Later that evening we bought a generic ice cream cake from the grocery store, added some candles to the top and called it a day. Although we usually opt for a small dinner with a few close friends instead of an exuberant party, my dad’s birthday still felt more isolated than previous years. All we could think about was how restricted we were trying to celebrate in the pandemic.

It was then that I realized because of our distance and our limited time to communicate, I was not as emotionally close to my relatives as I wished to be

About a month later my cousin, Sahi, who lives in Toronto, Canada, turned 16. As discourteous as it sounds, I knew it would be a day of my mother imploring me to call and engage in an incredibly awkward 10-minute conversation with my cousin while she glared at me when I couldn’t come up with more discussion topics. Honestly, I was eager for the day to arrive, so the phone call would be over with. When I received a Zoom meeting invitation instead of a phone call the day before her birthday, I wasn’t sure if I should have felt elated at the prospect of seeing my relatives together on one video call, or dread for what would surely end up being an hour of uncomfortable conversation. I remember guiltily shoving those feelings of apprehension away, ashamed with my lack of motivation to talk to the family members I rarely saw. It was then that I realized because of our distance and our limited time to communicate, I was not as emotionally close to my relatives as I wished to be, leading to our less than desirable exchanges over the phone.

When the time for our Zoom meeting approached, I anxiously entered the code as my parents and sister huddled around the laptop with me. This would be the first time we had talked face-to-face since last summer, and I’ll admit I was nervous to see my extended family again. How would we continue the conversation after exchanging pleasantries and singing ‘Happy Birthday’? A thought crossed my mind — surely my mother wouldn’t force me to dance one of the pieces I’d learned, or even worse, sing a song with my sister. I was starting to believe phone calls were my savior rather than my demise. As the Zoom call finally connected, we looked at the familiar faces on my mother’s side of the family, including the birthday girl herself.

Almost immediately, I felt a sharp jab in my side as my dad nudged me toward the microphone to compel me to talk to my cousins. I instantly glared back at him and subtly tried to shake my head, indicating I would rather not be the first to turn on the microphone. My mother rolled her eyes at the both of us and reached over to unmute before exuberantly saying hello to Sahi and her family in Toronto and my uncle’s family in London. There was collective chaos as my cousins, aunts and uncles all greeted each other one by one. For a moment, it seemed as if we were all in the same room, enjoying time together we hadn’t had in over three years. My sister and I led a quick chorus of ‘Happy Birthday’ and my cousin and her family showed us the vast assortment of food they had prepared. As my mother made small talk with her siblings, my cousins and I played multiple party games, including Pictionary and Charades, which my sister and I blatantly cheated in.

Although it was still midafternoon for us in Columbia, it eventually became late at night in London and we had to say our goodbyes. A layer of disappointment draped over everyone, similar to when we had to part ways in person. I had no idea forcing some family time would reduce the existing awkwardness from disconnection. Long distance communication can be hard on family relationships, and combining it with a global quarantine makes traveling out of the question. But using something as simple as a video call can provide families like mine with the togetherness they need.

How have you celebrated birthdays during the pandemic? Let us know in the comments below.