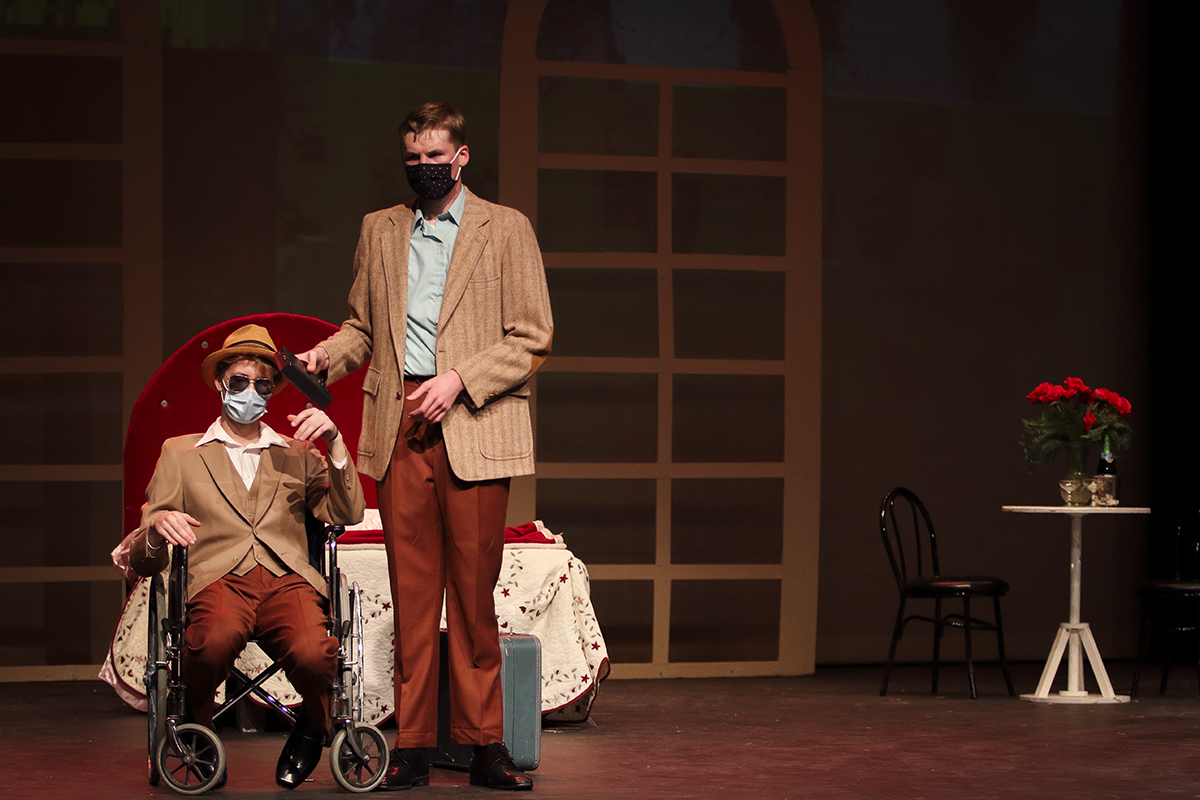 With a final virtual broadcast to audience members watching from home, the RBHS theater department concluded its production of the fall musical, Lucky Stiff, Dec. 4. Lucky Stiff follows the story of an English shoe salesman, Harry Witherspoon, who must bring the body of his recently murdered uncle on vacation to Monte Carlo. Hilarity ensues as Witherspoon attempts to pass his uncle off as alive in order to inherit his $6,000,000.

RBHS last performed Lucky Stiff in 2006, but considering COVID-19 precautions this year, the production and performance process greatly differed from previous years. Preparation began with Director Mike Pierson creating protocols on how to safely produce the musical. Pierson said these new rules included requiring all students to wear masks through all but the final rehearsal, socially distanced singing rehearsals, additional cleaning, prohibiting the sharing of scripts between cast members, eliminating the tech crew, daily temperature checks and beginning rehearsals by asking each participant questions about possible COVID-19 symptoms or exposure.

“Although it was different than a normal year, the schedule and procedures we outlined worked out perfectly,” Pierson said. “The biggest challenge was not having a tech crew at all. We also were missing some important production staff for some of the lead-up to the recording due to COVID-19 restrictions.”

Despite the precautions, casting of the musical began as normal: with auditions. This year, however, auditions were held virtually, and interested students could submit a video for consideration. After the first round, remaining students met in person and split into small groups to read scenes. Junior Aidan Ryan, who played Harry Witherspoon, said he auditioned for the part because he felt a connection to the lead character.

“I audition for people I could see myself performing in,” Ryan said. “I do well in silly or character roles so my character was a pretty good fit. My character, Harry Witherspoon, is an Englishman who is really down on his luck. He’s a pretty awkward/nervous kind of guy, but he comes out of his shell as the story progresses.”

Once Pierson announced the cast, members began rehearsal and preparation. Cast member and senior Natalie Robuck, who has performed in two other fall musicals, the Little Mermaid and Anything Goes, said the precautions brought new challenges to production and cast bonding.

“This year, we only had three tech members helping with lights and sound, so no one was available to help move set pieces. Everyone in the cast had to step up to help make everything run smoothly,” Robuck said. “We also had to be socially distanced as much as possible, which meant we weren’t able to spend a lot of time getting ready in the dressing rooms. [During previous musicals,] it was always fun getting to talk with cast mates while doing your makeup and getting dressed, but this year we weren’t allowed to linger in the dressing rooms.”

Still, Ryan, Robuck and Pierson all agreed the cast overcame the difficulties of performing a musical amidst the pandemic. Pierson said he was impressed by the group’s ability to persevere and collaborate despite the circumstances.

“That was one of the great parts,” Pierson said. “This cast didn’t let those things stand in their way at all. They continued to strive to be the best they could and support each other through the process. The absence of a tech crew meant that they also had to work together to move set pieces around to keep the rehearsals moving.”

The show was available to audiences from Nov. 30 to Dec. 4. Interested viewers purchased tickets online for $10 and received a link to watch the performance at 7 p.m. on their preferred day. Pierson emphasized the musical was not available for live stream or stream-on-demand. In order to record the show, the cast performed without an audience but were mindful of where cameras were located. Robuck said although the lack of audience members made performing this year unique, the situation helped the cast form closer relationships.

“It was really strange not to be working up to multiple nights of performances with the ability to see your friends and family who came to watch after the show was over. When we filmed the bows it was a bit depressing, as usually that’s when the audience is cheering for you for completing the show, but it was completely silent except for the music,” Robuck said. “My favorite part was the cast. The cast was smaller this year in comparison to prior years because of COVID-19, and I feel like I made more friendships and connections with the cast than I have before. We had a lot of fun together, and I’m very grateful that I was able to spend the time with everyone.”

Though it is unclear how future musicals will run, Ryan also said the cast and crew made the most of the circumstances. He said despite the precautions and challenges, he is thankful for the opportunity to perform at all.

“Musicals at RBHS are always filmed. Looking back at this show in particular, also considering the current circumstances, I’ve learned that you have to stay present because the process flies by,” Ryan said. “Once you realize that you’re incredibly happy to be doing a show during a pandemic, and that Broadway isn’t even performing right now, the show is already over. I also learned that you can’t be disingenuous. Not to say I wasn’t genuine during the show, but I really focused on that during the rehearsals. I made sure that I was calm and focused onstage, and in doing that I was genuine in my acting.”

How do you think activities should operate during COVID-19 precautions? Let us know in the comments below.

School shootings and gun violence lead to discourse and policies

The delusions and complexities of the Manic Pixie Dream Girl trope