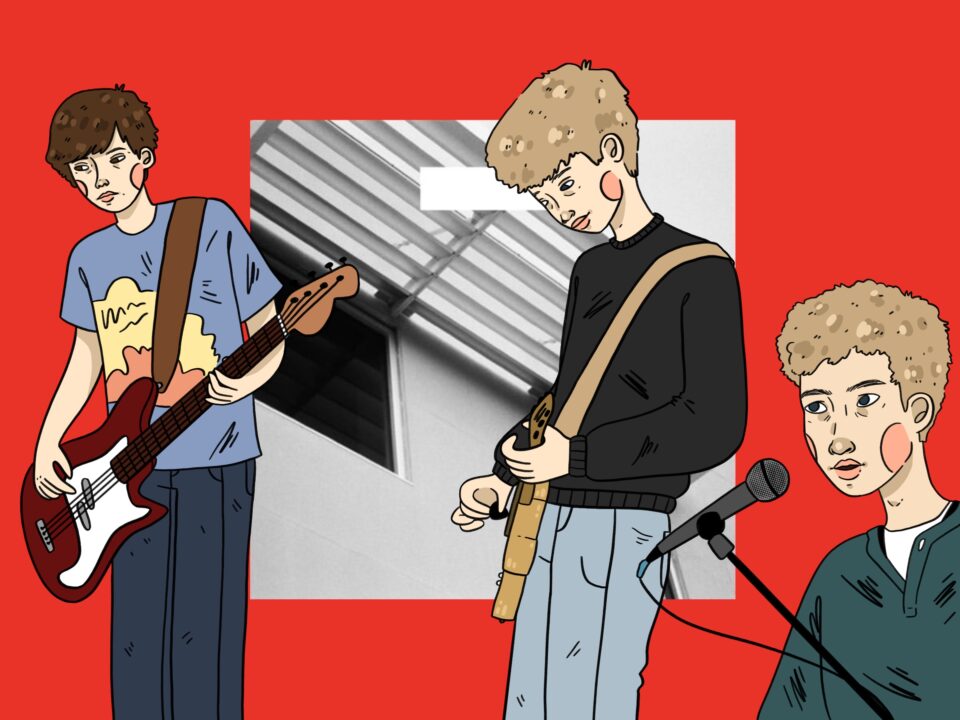 On Feb. 28 2019, Columbia band The Sweaters released their debut EP “Focus and Ask Again”.  “Say It’s Alright” amassed over six thousand streams on Spotify in the past year. The EP was a starting point for the band, but their self-titled album is completely different. The  album is refined, and certainly sounds more skilled. With “The Sweaters,” the band has cemented themselves as an Indie group.

The band, consisting of Ben Cohen, Henry Cohen and Anders Harms wears their influences on their sleeves on the album. Though each song has its own personality and identifying factors, they can all be grouped by what other genre of music the songs sound familiar to.

“Staying the Night,” “Marquette,” “Wyoming,” and “Nalgene” all remind me of Beach House. The reverb on the guitar and spacey guitar all have the same vibe as “Depression Cherry” era Beach House. On “Staying the Night,” both the drums and the guitar are played in a way that brings attention to the bassline, overall making the song more catchy. Ben Cohen is the lead singer and drummer of the band. The Sweaters need to be able to perform live, and the only way they can do this realistically is by writing drum lines that are simple, so that Ben Cohen can play them successfully and consistently. The song is such a great introduction to the album because the listener is effectively “Staying the night with my lonely/ Staying the night in my mind.”

But I would beat Marquette for you”

Of all the singles on the album, “Marquette” is easily the best. Ben Cohen’s vocal performance is generally spacey and mumbled, but on “Marquette” he’s singing loud and clear; he’s finally got something to say. Right before the chorus, the guitarist Henry Cohen slides his hand down the fretboard of the guitar, causing a high screech, then strikes a chord. There’s a lot of different ways to interpret the lyrics of the song, but I think it’s most likely Ben is battling with performance anxiety. When he sings “The only time I see you’s when I’m up by 3 to 2/ But I would beat Marquette for you” is most likely referencing experiencing anxiety and self-doubt at the Marquette High School debate tournament.

“Wyoming” is the second single on the record, and it’s one of my favorite songs by the band. The lyrics are nonsensical, like when Ben Cohen sings “You shook your head I put my eyes down/ But that’s okay cause now I’m bored/ I left my hat in Wyoming on a cliff/ I left my heart on a bus” but the beat and melody are really catchy and pleasing to the ear. More than anything, “The Sweaters” are selling a “vibe” with their music, and it’s really noticeable on this track.

“Nalgene” is an exceptional closer, it’s the best parts of the band in one track. The charming lyrics, simple guitar and drums make the song feel like a conclusion. “The Sweaters” is the band’s debut album, but “Nalgene” already has me thinking of the band’s potential in the future. The guitar in the song is hypnotic and although it was repetitive, it was fun to listen to the whole time.

“I Love Music”, “Hot Soup!” and “Aileen” all sound like Weezer. The catchy choruses and guitar tracks both sound like they’re heavily inspired by early 2000’s pop rock. “I Love Music” feels like watching “The Sweaters” perform at a basement concert. The song’s production and instrumentation is so laid back it feels like it was made for live performances. Vocalist Ben Cohen sings a melody that sounds like something out of a Weezer album, with the layered guitar track and slow tempo. The lyrics make it a perfect song to sing in the car with friends, but they’re a bit more complicated upon further inspection. “Now the verse is coming to an end/ the water’s getting black and I want out,” Ben Cohen sings. Here, I think the lead singer’s dissatisfied with the music industry. The chorus of “I Love Music” is satirical; Ben’s not actually singing about how much he loves music on the track.

“Hot Soup!” is one of the weaker tracks on the album. The song’s obviously heavily inspired by Weezer, with its repetitive guitar and simple drums. But the lyrics are nonsensical, and the instrumentation isn’t enough to make up for it. Overall,“ Hot Soup!” doesn’t add much to the record, and breaks up the flow of the album. It comes between “Should I Need You” and “Cincinnati,” two fast-tempo songs which contradict its slower beat.

There’s not a lot to say about “Aileen.” It’s enjoyable, the vocals on the chorus are fun and masterfully sung, but the track doesn’t add anything new to the project, so it’s likely anyone listening will become uninterested. Everything about the song is repetitive, and this deep in the album The Sweaters should be introducing something new.

The album finally picks up the pace on “Should I Need You.” The fast tempo and drums make it a song I’d wanna speed in my car to, and the lyrics remind me of a classic 80s rock song (The Clash immediately comes to mind). The Shoegaze influence on the record is easy to pick up on, but is most apparent on this track. Because of its nonstop instrumentation, “Should I Need You” sounds like a track off one of Beach House’s most recent albums. Something about the lyrics makes me gravitate to the song—the chorus is ripping at the seams with teen angst, and it asks an inherently relatable question: Should you need someone?

“Cincinnati” starts with a bright, crunchy guitar layered over itself, creating a sort of crowded effect that only stops once Ben Cohen’s vocals come in. Once the guitar finally slows down, the song develops a sway. Once again, this song sounds a lot like Shoegaze. The teen angst on the track is palpable. Lyrics like “I don’t belong” and “Everything is shitty/ I’m so depressed” are just appealing to their audience. “Cincinnati” is a song made by teenagers, for teenagers.

“Jessie,” like “Hot Soup!” and “Aileen,” is another lowlight on the album. Ben Cohen is inexperienced as a vocalist. He’s an extremely young artist, and just hasn’t had the time to become a truly well-rounded lead singer. That’s okay, and it’s not a problem on most of the songs on the record. But on “Jessie” his inexperience is put in the spotlight. For the first time on the record, the instrumentation is actually unimpressive, and the song is overshadowed by better and more refined tracks like “Marquette.”

“The Sweaters” didn’t need to deliver a trailblazing debut record that would go down in history as genre-defining. The band needed to make music kids from their local town would enjoy. If they successfully made a project that was enjoyable for their audience, that they could dance and relate to, they would have succeeded. And they accomplished that. Songs like “Staying the Night,” “Marquette” and “Wyoming” are appealing to the band’s audience, and are universally enjoyable for teenagers. “Focus and Ask Again” pointed the band in the direction of the Indie genre, but the self-titled album cemented them there. “The Sweaters” are Indie, and they’re here to stay.

Did you enjoy the new The Sweaters album? Let us know in the comments below.

i thought the album was good this writing was fine.