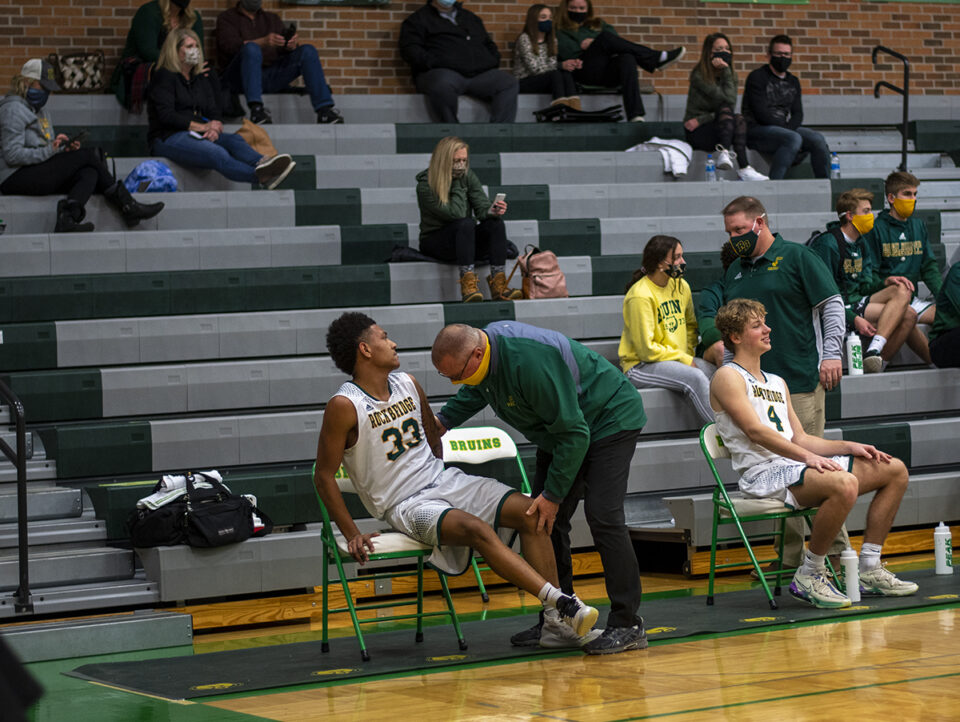 Senior forward Carlos Brown sits on the bench, while a medic inspects his ankle. Brown sustained an injury in the last quarter, and had to sit out the rest of the game on Tuesday, Jan. 5. Photo by Ana Manzano.

The RBHS varsity boys’ basketball team defeated Capital City high school in a home game Tuesday Jan.5. After pulling an early lead 20-12 by the end of the first quarter, the Bruins maintained their edge throughout the rest of the game, winning 71-46. Although the boys won by over 20 points, junior Hudson Dercher said they had a rough game in terms of making shots.

“We need to shoot the ball better,” Dercher said. “The most difficult part of our game on Tuesday was our shooting performance.”

Dercher said the team needed to practice more intensively to improve, but their time in the gym is limited as a result of COVID-19 restrictions. Senior John Powell said their season as a whole has changed completely from previous years.

“Everything is different from [COVID-19],” Powell said. “Coaches are very stern on wearing our masks and [being] careful who you are around outside of basketball.”

Sophomore Brady Bowers said he was annoyed that several of their games and practices were cut short or cancelled.

It was our first time ever playing Capital City and we won so it felt good. We will just keep working on what needs to be perfected and just work hard everyday to get where we need to be.”

Additionally, the team has had to quarantine multiple times throughout the season, further restricting their court time. Although their game against Capital City was at RBHS, even home games have limited attendance because of pandemic guidelines. Bowers said that even though there were several setbacks, he was proud of the team’s success.

“It was our first time ever playing Capital City and we won so it felt good,” he said. “And we will just keep working on what needs to be perfected and just work hard everyday to get where we need to be.”

Communication while playing was another issue Powell felt the team needed to improve on. He said even though they had their strong moments, sometimes the players operated more as individuals rather than one collective group, and he wants to boys’ to be more consistent throughout the game.

“We played sloppily in the 4th quarter, leading into the emphasis on closing our games; or in other words keeping our foot on the gas till we reach the end,” Powell said. “But the most memorable moment was right before halftime when we went on a big run and showed how good we can be when we are all on the same page.”

Have you been to any of this season’s basketball games? Let us know in the comments below.