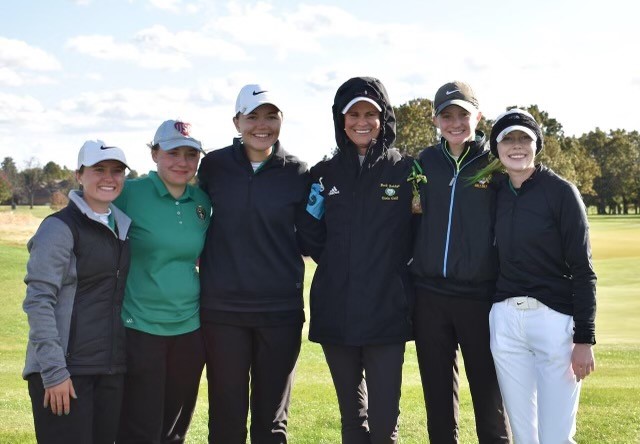 RBHS counselor Melissa Coil announced she would be stepping down as head coach for the girls’ golf team earlier this school year. She said a primary reason for her step down was to focus more on her family and personal life. Previous head golf coach Vicki Reimler recruited Coil in 2005—two years after Coil became a counselor for RBHS—to help her become more involved with RBHS activities. Coil said, however, the circumstances that allowed her to coach 16 years ago changed in recent years, after she became a wife and mother of two children—soon to be three.

“As any coach can tell you, coaching doesn’t stop when practice or a game does. There are always emails, texts, phone calls and all the catching up from work that is missed when you miss school,” Coil said. “2020 has taught me that my time with my kids at home is precious and fleeting. My kids deserve to have me home and solely focused on them for a while.”

To comply with the shift in her priorities, Coil made the decision to step down from coaching. During her time as head coach, Coil helped the team place in the top four at the Missouri State High School Activities Association (MSHSAA) girls’ golf state tournament for the past 11 years, winning the state championship title in 2011 and 2012.

“Melahn is more than just a coach to us. She’s a mentor, a friend, a therapist, a great listener and everything more.”

Senior Madison Moller, who was on the team all four years of high school, said Coil taught them how to handle the difficulties of competing in the high-stress environment of the MSHSAA state tournament. She said during her junior year, the weather proved to be a challenge while playing, but Coil encouraged the girls to think critically about the distinct conditions and trust in the skills they refined throughout the season, rather than become frustrated.

“You could tell she truly believed in each of us and our abilities. [The second day of the state tournament], I think almost every one of us improved and we ended up securing the 4th team spot,” Moller said. “Melahn is more than just a coach to us. She’s a mentor, a friend, a therapist, a great listener and everything more.”

Both Moller and senior Abbygail Baker said the golf girls prefer to use Coil’s maiden name, Melahn, as a nickname. To Baker, Coil is also a close family friend. In addition to having two older sisters who played on the team, Baker was also one of the flower girls in Coil’s wedding.

“Being able to grow up having Melahn in my life has been a blessing because she has taught me so many things,” Baker said. “One of the things that she would always tell me was to ‘quit being a Baker’ whenever I did certain things that my sisters would do on the course. Although I hated it at times, it did make me laugh.”

Baker said Coil communicated with each player individually when they were nervous or faced setbacks while competing. Coil worked to improve the success of the team by building personal connections with the girls to know how to comfort or motivate them when needed. One of Coil’s strategies, Moller said, was to provide the team with quotes written on small, laminated cards before each tournament, so they could refer back to these mantras at any time. Out of the many skills she learned from Coil, Moller said she believes being able to stand up for herself was one of the most important.

“There have been many unfair situations she and the team have been placed in,” Moller said. “But she always takes a stand with the incredible dignity and grace she always possesses.”

Coil said she hopes the lessons she’s taught through golf will assist the girls far beyond their sport. Some of these qualities include perseverance and resilience, which she said helped the girls’ self development throughout the years.

“I’ve coached amazing girls who are now very successful young women,” Coil said. “So if anything, that is why I coached—to be a small part of that process and story for those girls made all the years of coaching totally worth it.”

How do you balance your work and personal life? Let us know in the comments below.