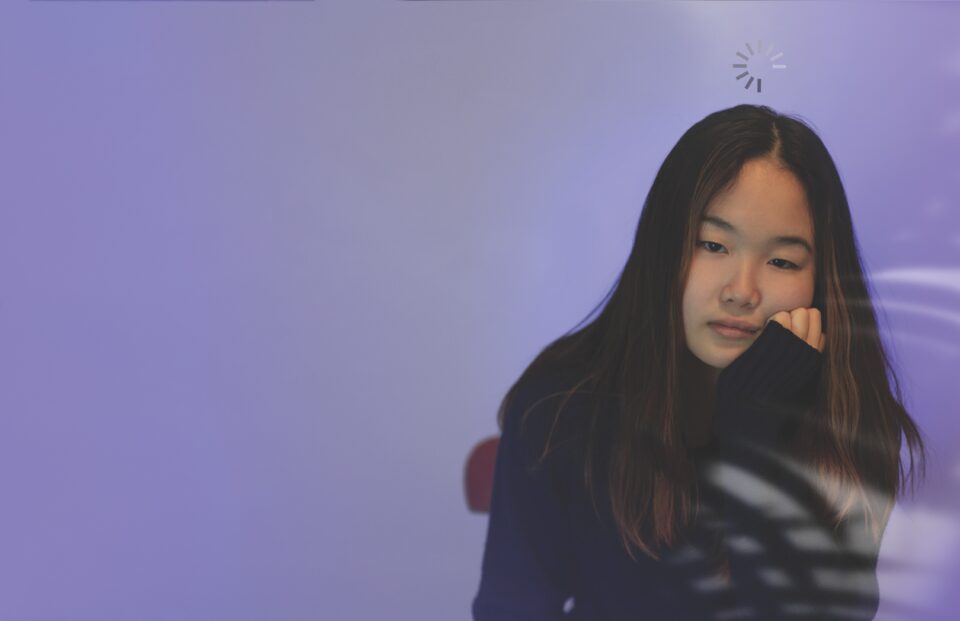 For RBHS senior Kellen Sapp, waking up and attending virtual classes means missing out on the informal, spontaneous interactions which occurred with classmates in an in-person setting. It leaves no room for random chatting with almost-strangers, or decoding subliminal messages received from the teacher. These missing cues tell us what others are trying to communicate, providing a sense of ease and informality.

“Virtual learning has meant I don’t get to have the same interactions with my classmates that aren’t my close friends,” Sapp said. “One thing I really miss is spending time with the people who I saw in class every day even if we didn’t interact outside of school. Now I just see those people on my zoom screen but don’t get the chance to just talk.”

Sapp also said it’s difficult to obtain the special sense of informality that comes with in-person classes, which consisted of things like spontaneous classroom banter or an absence of hesitance when answering questions. The constraints of Zoom change the atmosphere to only allow for verbal cues and limited nonverbal cues.

“Things on Zoom feel like they have to be important.”

“All interaction with classmates feels a lot more formal. Because the teacher can hear everything you say and the times when they can’t, you’re usually in a breakout room with an assigned task; it’s more difficult to have casual conversation,” Sapp said. “Things on Zoom feel like they have to be important.”

This sudden formality has a larger explanation. Laura Kessel, a speech-language pathologist at RBHS, described the subtle, missing cues and how their absence impacts social interactions during video conferencing meetings. Body indicators like posture and body movement are indecipherable in Zoom calls. Facial expressions, among other things, are now limited, if not obsolete.

“Cues are restricted, particularly since the forehead may be covered by hair, as well as by the size of the image,” Kessel said. “And those are only available if the camera is on and lighting is reasonable. [Another missing indicator is] hand placement and movement. Also, these are quick, so easily missed if you don’t know who is speaking.”

Besides those physical gestures, volume and eye contact are changed from an in-person setting. Some things that were natural in a physical classroom are no longer a given. Kessel said direct eye contact is a major example of this.

“The volume in people’s own environments means that they often have to be muted most of the time. There are no audio cues that someone may want a turn to speak, like a quick verbal acknowledgement,” Kessel said. “[Eye contact] may be missed as you don’t know who is going to speak before they begin. By the time you look at their face, you have missed some of those cues.”

Because of the absence of these things, the teacher-student dynamic is made more difficult, as it is harder to establish a sense of authority. Additionally, the disappearance of a classroom setting and its attributions, like a clear physical separation from the teacher, with the teacher usually standing in front of the class, changes this dynamic.

“There are also no physical delineations between teacher and students,” Kessel said. “Typically, a teacher is standing and students are sitting. This is the structure that we recognize as a learning environment. It identifies the authority in the room, and the speaker with the most knowledge and guidance.”

Other than a missing physical dynamic between teacher and student, Sapp also mentioned how teachers and students struggle to connect and communicate without important nonverbal cues.

“There’s so much more silence in a Zoom classroom both because many people are on mute and because of the perceived formality of the virtual classroom. People are hesitant to answer if they don’t exactly know the answer and so there are long pauses between a teacher asking a question and anything happening,” Sapp said. “Teachers can’t monitor our understanding based on nonverbal cues the way they always have and so that leaves silent ambiguity in the pauses between ideas as they wait for a verbal cue.”

Similarly, teachers also face setbacks in the digital classroom. Not only do they have to attempt to communicate over these platforms like students, but it’s also crucial educators can receive signals to know if their class is learning and whether they should change course. This is part of any teacher’s job, but with apps like Zoom, it’s even harder. Kristin Reed, a French teacher at RBHS, described her virtual experience as one plagued by the “black screen,” a universal struggle among teachers currently.

“A definite con would be that it is very hard to read the cues, especially when sometimes, there are no cues to go off of. A black screen with a name.”

“It is very, very difficult with the students I have never met in-person. Some are never able to have their cameras on. I hardly know what they look like,” Reed said. “We have adjusted, for the most part, to the current learning process. There are many pros and many cons. A definite con would be that it is very hard to read the cues, especially when sometimes, there are no cues to go off of. A black screen with a name.”

Despite the notion that direct verbal cues seem to be the most effective way to communicate now, Reed described another strategy which works for her—the Zoom chat.

“I try to remember to ask for thumbs up or down, and the chat is very helpful,” Reed said. “In certain classes the chat is going non stop, and I love it.”

Despite people finding creative ways to use Zoom, Kessel made clear that video conferencing features will never be able to replace the cues received from physical body placement and eye gaze. Additionally, challenging lip reading cues and limitations brought on by video conferencing platforms like Zoom creates even more challenges, as Kessel said everyone uses lip reading cues to some extent.

“The placement of the articulators adds information that your brain can use to clarify speech sounds and sound combinations. This is harder when the lips (entire picture) is reduced to the size of a quarter (in many cases),” Kessel said. “The audio/tech features of Zoom mean that no two people can speak at the same time. That is unnatural as we usually have a gradual release and beginning of speaking turns.”

Even with all these barriers, most people are trying their best to stay in touch. Sapp said he’ll send a “good morning” text to his friends when they’re on Zoom together, or he will utilize Zoom breakout rooms to try to incorporate the type of casual conversation that would occur in a physical classroom. Kessel said she doesn’t know what the lasting impact will be for students, especially for those who already struggle with social cues. In the meantime, however, planned interactions are key.

“Games that are more social and verbal that can be played via Zoom, [providing] a little structure to ensure everyone gets a turn, or is at least specifically provided a turn,” said Kessel. “Including Zoom when you might not have before, while watching a movie for example. That way, you don’t have to talk a lot, but you could and hear your friends comments, questions, just as you would if you had all gotten together to watch it.”

How do you think teleconferencing platforms such as Zoom have affected your social experiences? Let us know in the comments below.