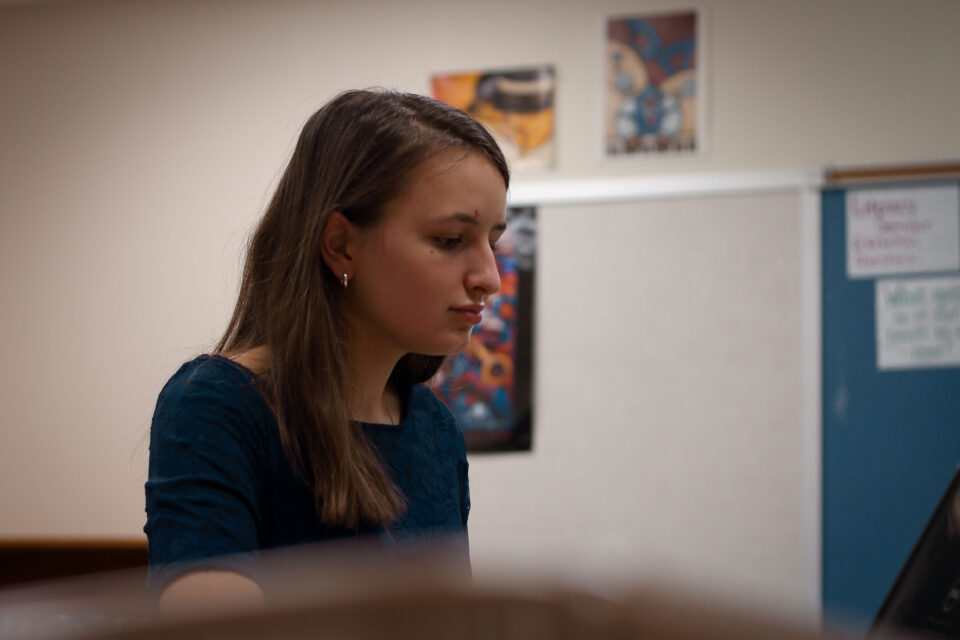 Instead of loading onto a school bus and making the long drive to a tournament’s host school in cities such as St. Louis or Springfield, the RBHS Speech and Debate team has stayed right at home to compete. Tournaments are all held over National Speech and Debate Association Campus, an online platform for students to compete in, and Columbia Public School (CPS) allows students to use three of their high schools including RBHS, Hickman High School and Battle High School for internet and to be around their peers.

They can also choose to compete in the comfort of their own home like freshman Jade Castilow, a novice debater who participates in Policy Debate, a 90-minute long event. She partakes in this three to four times in a day when competing.

“When doing online tournaments,” Castilow said, “I always have to tell my parents to be quiet so if I’m talking there won’t be any background noise.”

Background noise isn’t the only problem with Zoom tournaments, however. Castilow said technology can become an issue, especially when judges don’t understand how Zoom works. In addition to this, Castilow said she feels it’s more difficult to debate over the video calling application.

“I don’t know what I sound like over Zoom, so I don’t always know if the judge can hear what I’m actually saying,” Castilow said. “Speaking is a big part of the debates, so if you don’t sound good the judge can take off a lot of points.”

CPS Speech and Debate head coach Dr. Danielle Johnson said the change from in-person to virtual has changed the atmosphere of tournaments. Hand gestures and other motions that speakers utilize can be hard for judges to see, but Dr. Johnson said there are positive aspects as well.

“I think that for the most part, it brings the judge more into it, in a way, because the judge has to facilitate the technology and do the judging,” Dr. Johnson said. “From my instinct, it feels like people are more polite in the setting …, mainly because everyone understands that we’re dealing with a lot of different elements. People try really hard to help each other out with the technology if something goes wrong.”

This is Dr. Johnson’s first year as the CPS head coach for all Speech and Debate teams in the district, a position that did not exist before this year. CPS made a change from having one main coach and one assistant coach per school to having one who oversees all three high schools’ teams alongside assistant coaches for each school. Dr. Johnson said her job is to nurture and inspire her students while supporting them whether they are as successful as they hoped or not.

“My number one coaching tool is to provide significant feedback, either by watching stuff like performances and telling them how they did, or reading their case and telling them what could be better,” Dr. Johnson said. “And I always tell my students, even if it comes across as harsh, that critiquing is a way of showing someone you care about them and you respect them as an individual and that you want them to be the best they can be.”

The whole team meets on Zoom to practice every Monday and Thursday, where there could be as many as 40 people, before they split off to go to breakout rooms led by student leaders, who have “been incredibly supportive and helpful,” Dr. Johnson said. In addition to these practices, members usually have another Zoom meeting if they have a tournament coming up where they deliver a speech or debate against someone and receive feedback on their performance from a student chair or coach. They can put far more time into preparation outside of these Zooms, however, as Castilow and her partner have been calling each other almost every night to prepare.

I’m gonna care deeply about these competitors and I hope they will care about me and respect me, but we’ve never even been in the same room together.“

The whole team communicates with each other through many different platforms. Debate partners aren’t allowed to be in the same room while competing, as this may give them an unfair advantage over those who can’t be together, so some partners set up Discord calls or phone calls that last as long as the debate round to communicate between speeches.

“The primary form of communication has been Zoom, but we also use Discord and other platforms as well,” junior Carson Dale, Co-Chair of Public Forum Debate, said. “It’s been a challenge, but I’m happy with the progress we can make considering the circumstances.”

Members haven’t been able to go on bus rides, attend post-tournament dinners and tour the city of the National tournament together this year. These moments are just another major part of the Speech and Debate experience students are missing out on.

“One of the things I’ll miss the most this year is the excitement [of] breaking to the next round at in-person tournaments,” Dale said. “With the team cheering you on in person, it added another layer of excitement to the process that is kind of lost online.”

As for the team bonding aspect, Dr. Johnson said she was surprised how quickly new members have connected with the existing community. She said although she’s sad the team isn’t going to be able to have in-person celebrations such as the holiday and end-of-the-year pizza parties, she’s started new traditions, such as baking and bringing cookies to first-place winners of tournaments.

“I think the hardest thing is that I’m in this position where, by nature, I’m gonna care deeply about these competitors and I hope they will care about me and respect me, but we’ve never even been in the same room together,” Dr. Johnson said. “It’s so strange to me that, because I’m new to the school, new to the position, that there are students I have coached and supported…that I’ve literally never met.”

How have extracurriculars changed for you? Let us know in the comments below.

Missing cues of the digital world