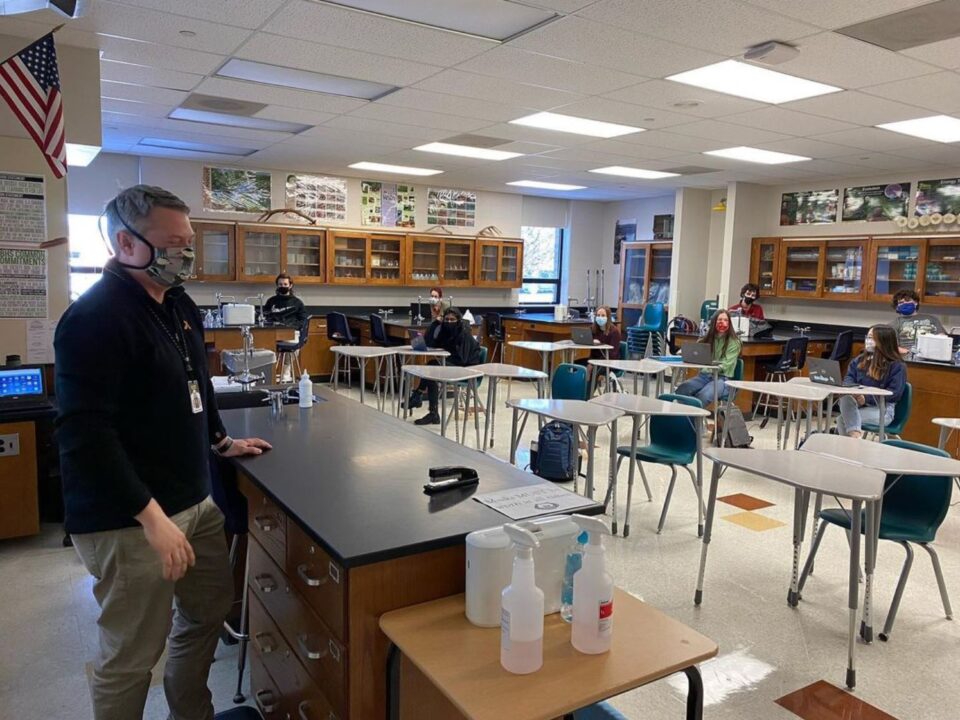 The Columbia Fund for Academic Excellence (CFAE) committee provides cash awards each year for educators in the Columbia Public Schools district who fall under the various categories for selection. This year, the RBHS committee nominated Dr. Andrew Kinslow for Outstanding High School Educator, Tammy Adkins for Outstanding Educator in a Specialized Area and Therasia Brautigam for Outstanding First Year Educator.

“I was very surprised and humbled by the nomination,” Dr. Kinslow said. “I am surrounded by exceptional teachers and have learned so much and improved my teaching by working alongside the best teachers and students.”

The RBHS CFAE committee is made up of Principal Jacob Sirna and past winners of the award. Faculty selects the nominees, and the committee makes the final decision for the three categories.

RBHS English teacher Mary Dix has been on the committee ever since she won the award in 2001. Her role, as well as other members’, is to solicit letters from people on behalf of the nominees. All nominees later receive binders of the original letters as keepsakes.

“The best part of the nomination process is the recognition of three outstanding people in our building. So many people are deserving of awards who may never be recognized in any other way.”

“[One] great part [of the fund] is to read the letters that are written; they are always heartfelt testaments to incredible people who passionately care about our kids,” Dix said. “The letters are filled with anecdotes about teachers going out of their way to support their kids and give them the best education possible. You can never read the letters without feeling uplifted by the sentiments expressed by parents, students and colleagues.”

One letter-writer is senior Ellie Barnett, who is writing on behalf of Brautigam, her yearbook adviser. She said writing a letter is “a good way to say thank you to Ms. Brautigam.”

“She has been such a blessing this year. I came into my senior year stressed because there was so much unknown and nothing was promised. I honestly didn’t know what yearbook would look like,” Barnett said. “This letter will only touch on how much she has done for the people in journalism. It’s a small bit of gratitude, but I think she’ll enjoy it.”

A committee from the Board of Education then reviews the letters for nominees from every school in the district and makes a determination of the overall winner of the award. The winner receives a check for $1500 and a silver engraved plate, and all nominees receive a binder of the original letters.

“The best part of the nomination process is the recognition of three outstanding people in our building,” Dix said. “So many people are deserving of awards who may never be recognized in any other way.”

If you would like to submit a letter on behalf of one of the nominees, give them to Michelle Parker in the main office or email them to MiParker@cpsk12.org as an attachment. Letters are due March 1.

Are you planning on writing a letter for one of the RBHS nominees? Let us know in the comments below.