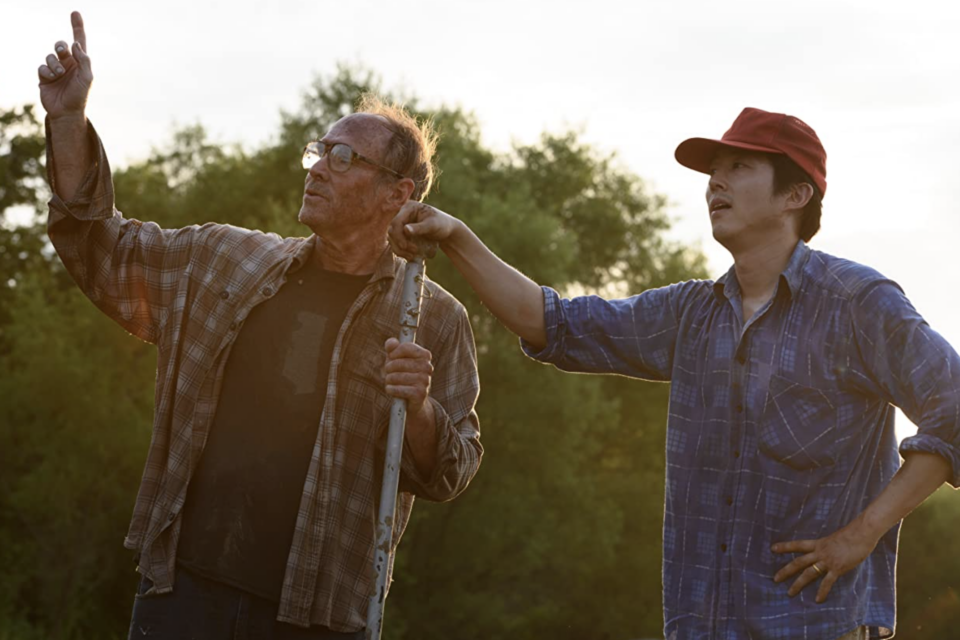 Will Patton and Steven Yeun in "Minari." Courtesy of IMDb

Lee Isaac Chung’s Minari, a Korean-American movie filmed in Oklahoma, shows the immigrant story in an unprecedented way. During the opening shot, the audience sees people shoved in a car moving up and down a bumpy road through prairies. I was as naive as the family, my eyes following the moving truck to a new home. When the cars stopped in front of a trailer, I was confused, and my instant reaction was that someone had swindled them. But, as the father, played by Steven Yeun, showed the kids their new world, I realized that this movie wasn’t about what I expected. Too often such stories treat immigrants as people with problems linked to their ethnicity and constant moving, rather than portraying it as it is to an individual — a struggle for the “American Dream.” The gentle balance of languages in the dialogue and constant want to embrace a culture seemingly left behind reminded me of my own world, and I found myself wanting to be in those fantasy fields, albeit laced with almost every hardship possible.

This movie’s specialty stems from its innate humanity. The entire movie makes you nervous, showing big vulnerable flaws that warrant paranoia. One of the characters is shown to have a deadly heart defect, but this happened right at the beginning. Throughout the movie, this human problem stays in the shadows, coming up at random moments to bring anxiety to the viewer. It is lifelike, with these problems manifesting not as turning points but rather a part of the entire story that weaves in with situations. The story plays out with life, and the things that do go wrong were not even dominant worries for the audience. Small plot points become surprises, real-life events that an audience immersed in this movie does not expect. Every twist and turn feels natural. Yet, it’s calculated to make you react in a certain way. The writing in this way is masterful, and the actors’ performances only amplify the intricately built world.

Going in, I had assumed the movie was plot-driven, showing the exploitation of people in the name of the “American Dream.” But, the characters are what make Minari, only furthering the movie’s innate ability to depict each event with intense realism. The father is shown to be strong-willed, skilled but continuously put down by those around him. He and the mother came to America with expectations, but instead, they cling to their values while being thrown hurdle after hurdle. The trailer home that the family lives in and the land around it represents the father’s last chance toward living a life proudly. It was his dream to build and produce for himself, and the farm showed that. At the beginning of the movie, he refuses help from a local resident who runs a business water dowsing. He works out where the water is on his own, calling his deduction the “Korean way.” In the end, the audience sees him and his wife together, following the man with the dowsing stick. He lost a little part of himself over the movie, and it was as if in order to secure the so-called “American Dream,” whatever it may be, one needed to give in to American society.

There is a calculated genius in the movie, and it is truly a testament to the immigrant struggle.

Expansive shots set characters stereotyped by media on a rural American backdrop, a combination foreign to many viewers. These characters go through the “American Dream” struggle associated with White Americans, and in this way, the story is able to incorporate smaller cultural elements in a landscape open to creative freedom. The grandmother’s presence, with Youn Yuh-jung receiving an Academy Award nomination for Best Supporting actress, added layers to their unique experience, filling in the missing humor and naivety to the family dynamic. Her own stories and dialogue magnify the pre-existing cultural discrepancies, as each person tried to hold on to what was known in the midst of the unpredictable. Minari never falls short on such details. Every aspect of the viewing is perfectly tailored, producing the reactions that Chung wants. No decision is arbitrary. The exceptional score, composed by Emile Mosseri, swept the viewer by their feet. Each picture on the screen is perfectly paired with an arrangement that builds up the same intensity as the emotions in the audience. Listening to the soundtrack even standalone fills you with the same warmth as seeing the sun seep into the fields or the car rolled up windows beading the kids’ foreheads with sweat. There is a calculated genius in the movie, and it is truly a testament to the immigrant struggle.

The family’s relentless spirit is mirrored in the minari, an edible plant, flourishing wherever planted. The movie questions what the “American Dream” actually is, interweaving personal aspirations with familial duties. By the end, the viewer can take it as they want. Maybe the dream is fulfilled, through the preservation of the family, or maybe it has failed, as the family loses a part of itself and begins to assimilate with the world around them. But, maybe there is no “American Dream,” and instead, life just unravels while one prioritizes oneself. Minari attempts not to answer these questions but to show the flawed perspectives people have toward immigrants’ lives and wants. The movie offers a story much needed in American cinema. With six Academy Award nominations, including Steven Yeun making history with the first ever nomination in the Best Actor category for an Asian-American, Minari is a milestone. There has never been a movie as authentic to the mentality and truth of immigrants in America.

What do you think of how Minari portrayed the “American Dream”? Let us know in the comments below.