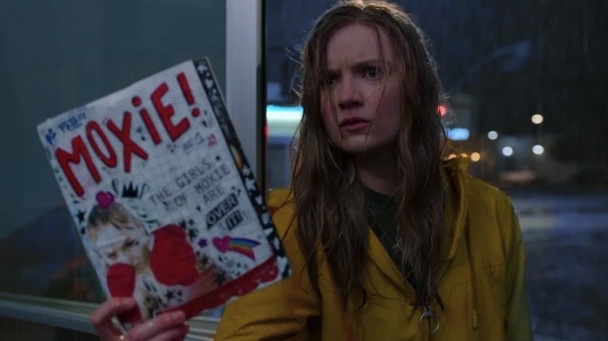 Comedian and actor Amy Poehler released her second directorial project, “Moxie” — following the mediocre reception of her film “Wine Country” (2019) — to Netflix last Wednesday. The film, which is an adaptation of the 2017 novel of the same name by Jennifer Mathieu, follows obedient and observant 16-year old Vivian (Hadley Robinson), who uncovers and observes sexist practices at her California high school. Finding inspiration from her mother Lisa’s (Amy Poehler) rebellious past as a member of the 90s riot grrrl punk rock scene, Vivian anonymously creates a feminist zine titled “Moxie,” which she sneakily distributes in the girls’ bathrooms at her school. The film uses zines in context of the riot grrrl movement, which utilized the historically punk pamphlets to spread anti-authoritarian and political messages often related to music. The zine soon inspires a movement to call out sexism at the school, culminating in a “Mean Girls”-esque ending that reveals plot points and finalizes the development of Vivian’s character and her relationships.

Netflix’s current path as a streaming device unpopularly aiming to remove cult classics in order to release more series and movies under its own production resulted in several recent series or films that were particularly shallow in the portrayal of teenagers — take “The Kissing Booth” installments, for example. Despite this, “Moxie” is surprisingly heartfelt.

It is an escape into a world where a 16-year-old girl can start a reactionary group that ends up holding people accountable, while finding someone who admires and uplifts her interests — the perfect Seth (Nico Hiraga), who plays a similarly dreamy part in “Booksmart” (2019). The movie sets a hopeful beginning for the careers of Robinson and Alycia Pascual-Peña, who plays Lucy, as well as a positive milestone in Poehler’s directing career.

Poehler’s portrayal of a single mother to a teenage girl is one of the most respectable and charming teen movies Netflix has to offer, because of Poehler’s effortless wit and comedic talent. Lisa is encouraging of Vivian but does her own thing, as the movie mentions her work and dating life. As a mother, she still holds the tenets of the person Vivian sees when she looks at images of Lisa’s punk past. In addition, her mother inspired much of what Vivian turns to as a means to cope with school life, such as Bikini Kill’s revolutionary music and subsequent zine-making. This is admirable, and a clear goal of the overall theme of the movie and its release during Women’s History month.

“It is a bit ironic, however, to include something so counter-culture and anti-authoritarian to its core under Netflix’s glossy, corporate control.”

The inclusion of zines in the storyline is creative in catering to Gen X, of which Lisa is a part of, and also pays an homage to their exclusivity in underground groups. It is a bit ironic, however, to include something so counter-culture and anti-authoritarian to its core under Netflix’s glossy, corporate control. This is particularly apparent in a scene where Vivian is looking at Lisa’s old riot grrrl memorabilia and uncovers a picture in which Poehler is clearly photoshopped into an image of Bikini Kill band members, replacing the spot of Kathleen Hanna, the lead singer. It’s almost laughable and makes the script look poorly written and unaware of the movement it uses as inspiration.

Vivian’s shy character would not have had the bravery to stand up to her school had it not been for her friends, mainly Lucy, who moves from the bay area to Vivian’s school and immediately encounters and challenges sexism there. It would be more realistic to see the more naturally brave and thoughtful Lucy at the forefront of “Moxie.” Though one theme of the movie is Vivian becoming more confident, “Moxie” doesn’t give Lucy enough screen time for the amount of potential her character has, and it seems like the promising and diverse cast is shadowed by Vivian’s discoveries that sometimes lack nuance and her cliche attitudes toward them.

Overall, “Moxie” is still an enjoyable piece for anyone who wants a bit of family entertainment but doesn’t expect a deep-dive into the riot grrrl movement.

How did you feel about “Moxie”? Let us know in the comments below.

i hated this movie and the fact that it centers on a white lead while the poc and queer characters are only secondary to the story is such a tone-deaf choice they made. anyways i think overall the writing felt forceful and as per usual it was a bad portrayal of high school environments in ways that were difficult to ignore for me mostly because i did not like other parts of the movie so i chose to knit pick the smaller aspects.