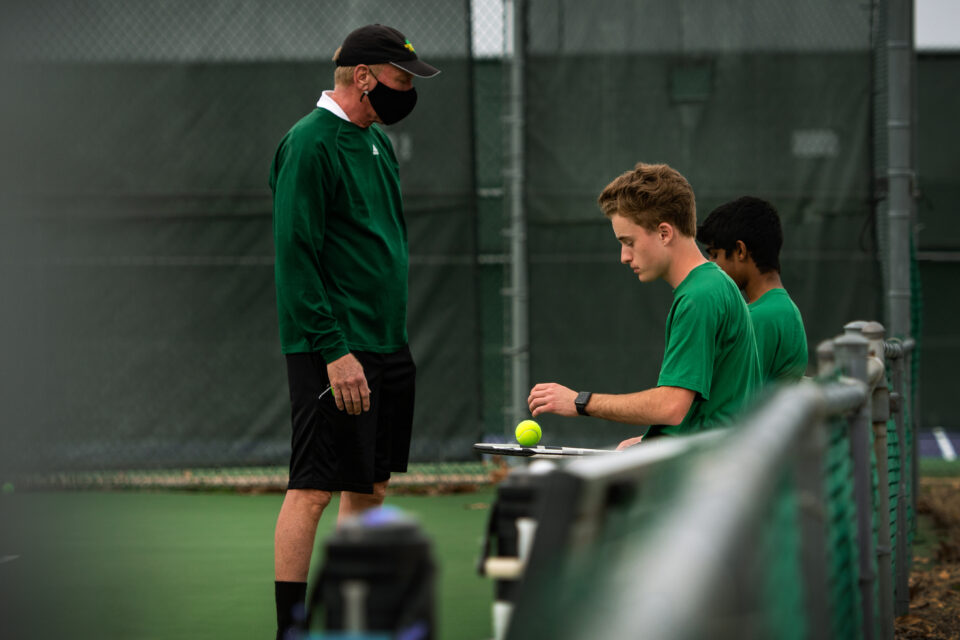 Longtime RBHS tennis coach Ben Loeb secured his 1,139th win on Monday, breaking the coaching record for most dual meet tennis wins in Missouri high school history. Loeb’s wins come from his years of coaching at Hickman High School from 1989-1994 and RBHS from 1994-present, although he also coached the University of Missouri⁠—Columbia womens’ team from 1986-1988.

“The biggest thing I’ve tried to emphasize, and I mean it ⁠— is that it’s a ‘we’ thing,” Loeb said. “It’s what we’ve done together … And without the efforts of many kids to value tennis as a sport that they wanted to excel at, this would not be possible. I know I’ve put a lot into my career throughout, so I feel good about being able to have this accomplishment, and it’s been a team effort to get it done.”

The home dual against Liberty-Wentzville High School was the first game of the boys’ season. Junior Ben Xu, a player new to the sport, was the “clincher” of the team, meaning he secured the final single’s match win needed for the team to win the whole dual. This was Xu’s first high school competition.

“It’s my first year on the team, but Coach Loeb has already impacted me a lot in our time together,” Xu said. “Not only has he improved my tennis abilities, but also he’s instilled a drive to compete and win in me and the rest of the team.”

“I know I’ve put a lot into my career throughout, so I feel good about being able to have this accomplishment, and it’s been a team effort to get it done.”

Loeb has garnered support from students and staff alike, such as girls’ tennis team member junior Abbie Sivaraman and RBHS Athletic Director Michael McGinty, who both attended Monday’s game. McGinty gave Sivaraman posters with the record number “1,139” on them, and she helped collect other members’ signatures to later give to Loeb.

“I think I’ve known Coach Loeb since middle school, just because he’s always been active in the tennis community,” Sivaraman said. “He’s always paying attention … [and] always thinking and looking out for us, which is really nice. He’s always talking about how it’s about the ‘we,’ not the ‘I.’”

As Loeb continues his decades-long run as a coach, he said he knows he’s in the later stages of his career. He said he wants to continue coaching for a while, as he’s “not too tired yet,” but he realized there will come a time when he has to cut back. He wants to be able to look back and know he’s given it his all, rather than feeling burnt out in his last years of coaching.

“I’m still driven by team ⁠— the idea of team,” Loeb said. “The idea in a sport like tennis where you’ve been individual until you get to high school tennis, so now you get an opportunity to function as a team and care about a collective outcome and work together to bring out your best in yourself, bring out the best of your teammates [and] prepare to compete against other schools. And I’ve always found that exhilarating, and that still remains to today. It’s a high to accomplish things together.”

Will you be at the next boys’ tennis match? Let us know in the comments below.