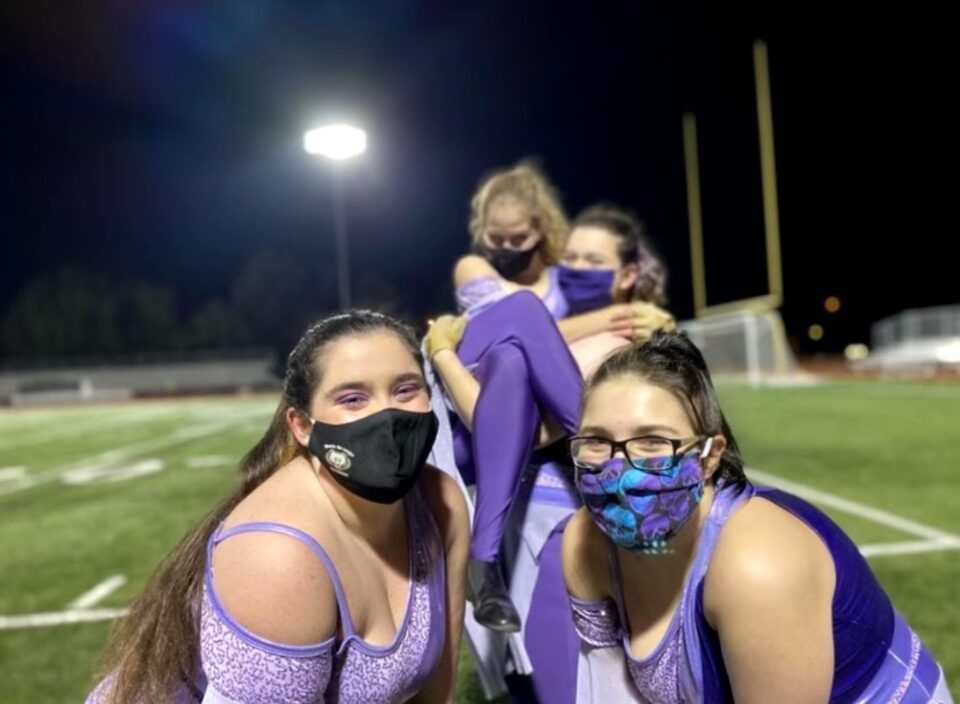 Auditions for the RBHS color guard will be on May 3 from 4:15 to 5:15 in the band room. The only experience necessary is the clinics held the past four Mondays.

“Color guard is both an art and a sport. During the fall, when we’re with the marching band, we are the visual aspect,” RBHS color guard instructor Sam Wallace said. “The guard brings life to the story the music is trying to tell. We do this through several mediums. We spin flags, obviously, but there is no limit to the kind of props, both large and small, that we manipulate to tell the story. Members learn how to spin a flag, dance, and even learn some acro skills in order to create a better show.”

“Color guard is both an art and a sport. During the fall, when we’re with the marching band, we are the visual aspect. The guard brings life to the story the music is trying to tell.”

During the clinics, the last one being yesterday at 4:15, potential members learned basic skills such as drop spins, windmills and tosses. Wallace said since “spinning a flag isn’t a skill you just learn somewhere,” students aren’t required to know anything about color guard before auditioning, and most don’t have any experience in dance or movement. The clinics are similar to regular practices in that the structure and atmosphere are the same, but the real rehearsals are generally more intense and frequent.

Sophomore Katherine Cox-Litrell started color guard in eighth grade when she attended spin club clinics RBHS puts on for middle schoolers. Her older brothers were in the RBHS band, whom the color guard performs alongside, so her mom encouraged her involvement. The main reason she joined, however, was because her friends also wanted to be a part of it.

“I would say that the two best things to come out of me doing color guard would be the people and the opportunities it gives,” Cox-Litrell said. “Freshman year is generally a nerve-wracking year for everyone, but after spending time with the rest of the color guard over the summer I already knew a good handful of people, so I didn’t have to worry about not knowing anyone, and I gained several older sibling figures.”

Cox-Litrell said her biggest piece of advice for anyone interested in trying out for color guard is to be patient with themselves, as spinning takes time to master and can be “frustrating when it doesn’t click right away.”

“I promise that you’ll get it down,” Cox-Litrell said, “and it will eventually become one of the easiest things you do.”

Sophomore Kyleigh Ashby, another veteran member, started color guard the winter of her freshman year after seeing them perform during the fall. She recommends color guard to anyone considering joining.

“I was on the fence about trying out for the first time, and now it’s something I love to do,” Ashby said. “As my first year guard was only seven people, it allowed me to become close with people who still remain my closest friends today. It’s also just a really fun and cool looking thing to do.”

Wallace said he will not take new color guard members, as the last clinic was yesterday, unless they can work to create an alternative practice schedule. Besides the community Cox-Litrell and Ashby mentioned before, the guard also gives different opportunities for the future, as several members have earned color guard scholarships for college.

“I think color guard is the perfect intersection of a performing art and a sport,” Wallace said. “You don’t have to start when you’re three to be an incredible performer by the time you graduate high school. You don’t have to be able to do the splits or do flips, though those certainly look cool in a show. It’s a great way to be a part of a team and make friends.”

Are you planning on auditioning for the RBHS color guard? Let us know in the comments below.