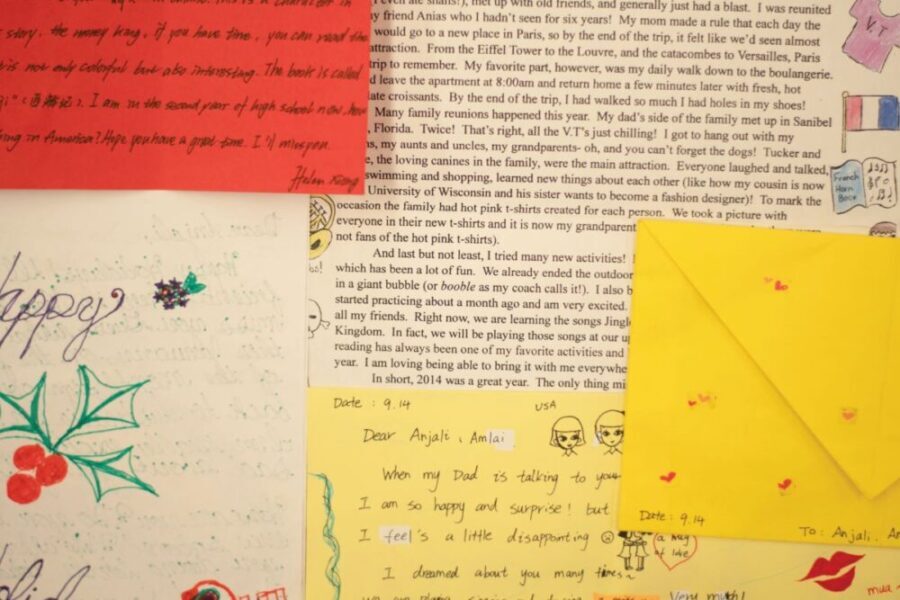 Living in an apartment complex reserved specifically for graduate students with families like mine provided me with a plethora of playground mates. It seemed I only needed to walk to the nearest apartment to find a friend. The experience also came with the unfortunate knowledge that as soon as the graduates completed their degrees, they, along with their families, would pack up and leave, moving to wherever their job called them. Some of my neighbors moved states, while others ended up moving to countries halfway across the globe.

After reading the book “Extra Credit” by Andrew Clements in my third grade English class, which showcased the benefits of letter-writing, I was inspired to keep in touch with my friends as they moved out of our complex, rather than completely cut ties with them.

My earliest friend-turned-pen pal moved back to her homeland of China after living in the U.S for two years. We became friends quickly because we went to the same school, and through our mutual love for hide-and-seek. Although we were friends for only a short period of time, our parents encouraged us to stay in touch. Our first plan was to chat via video call, but it quickly fell through as both internet issues and the time difference created a multitude of scheduling conflicts.

“It felt so easy to get wrapped up in my own troubles, but knowing there was a girl on the other side of the planet who I could relate to made them seem almost inconsequential, in a good way.”

We then resorted to sending letters and gifts when we were able, in order to maintain some line of communication.

Our letters usually consisted of information on school, family, friends and any other small moments we deemed necessary to share. Sometimes I’d scribble angrily about any recent quarrels with my sister while she’d write about the difficulties her most recent exam imparted. And of course, we couldn’t end our notes without endless promises to write soon and how much we missed each other. In a way, these exchanges were small gifts during the otherwise monotonous life of a student. I lived vicariously through the eyes of a girl in a city continents away from my home in the U.S., and it seemed our problems were one and the same—school and lack of entertainment while we weren’t doing school work.

My second pen pal, who moved across multiple states before returning to China where she was born, lived long enough in the U.S. to catalog more differences between our places of residence. We ended up emailing rather than writing letters, which allowed us to send each other photos frequently as well. She often complained about the intensity of her tests at school and also emphasized the stark contrast between our apartment community and her home in China, saying she missed the openness and approachability. Unsure of how to respond empathetically to a lifestyle I hadn’t experienced, I instead answered her dozens of questions concerning my well-being and reacted to the photos she sent.

After I moved to various new cities, I tried to keep in touch with my friends from previous towns via letters, and my preexisting penpals. It felt like I had connections everywhere at every moment.

And of course, we couldn’t end our notes without endless promises to write soon and how much we missed each other.”

Sometimes, the changes in our lives seemed almost unreal, like how friendly and laid-back neighborhood communities were where I lived, compared to the experiences my oversea penpals detailed. In a way, the distinctions grounded me. It felt so easy to get wrapped up in my own troubles, but knowing there was a girl on the other side of the planet who I could relate to made them seem almost inconsequential, in a good way. I felt I had less reason to complain, since I wasn’t unique in having friend drama or being overwhelmed with school work. In fact, I consider myself lucky that these were the least of my problems in a country that provides as many civil liberties as the U.S. Nonetheless, it alleviated much of my stress to know the qualms of a teenager were universal; across cities, states or even countries. My time in that little apartment complex ended up being my first experience in learning about the rest of the world, even as I remained in my own house.

Have you ever had a penpal? Let us know in the comments below.