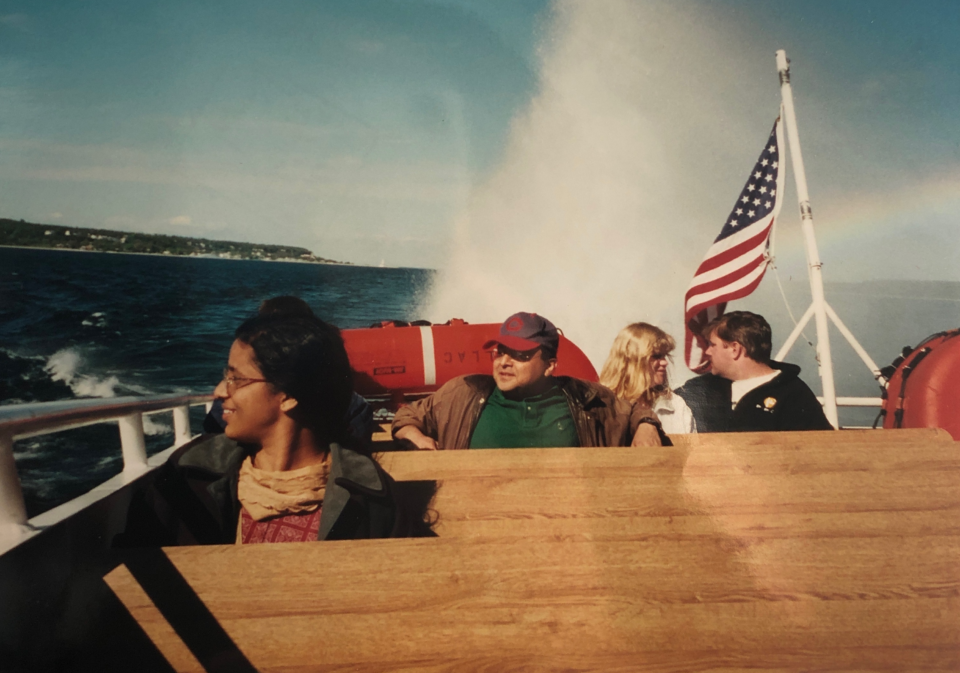 I’m the daughter of two immigrants who navigated a system built against them to come to the U.S. Neither ever knew that they wanted to leave their home country, but they always wanted for both of them to have the best life they could. My parents grew up in Delhi, India and went to Maulana Azad Medical College (MAMC) in the city. After marrying each other, they lived in a hostel while working. My mom was studying for the Indian Administrative Services (IAS) test, and my dad aimed to be a cardiologist. But, after about one year, they decided to move away from their home country,

“I moved to the U.S. because I didn’t think I had as many avenues of success in India and was frustrated by the practice environment,” my dad said. “I wanted to do cardiology, and I wasn’t sure if I would make enough money there.”

Their reasoning for moving was mostly because of opportunities for my dad. My mother, however, didn’t really think the same as him. She was close to her family and didn’t want to leave. Still, she stuck with my dad.

“We had nothing to lose or to gain,” my mom said. “Retrospectively, we thought about corruption and lack of support. But, at that time, everyone was leaving. Either they were coming to the U.S. or the U.K.”

For my parents, the biggest choice was deciding where to go.

“We had nothing to lose or to gain.”

They made a decision based on just that. My parents had gone through medical school and to them, the U.S. was the preferred way to go.

“It’s all peer pressure,” my mom said. “We wouldn’t have been here if it wasn’t for [Krishnan].”

In order to come to the U.S., a medical graduate had to take the Foreign Medical Graduates Examination (FMGE). But, this test ended in the ‘70s after too many medical students left India for other countries. Someone who was interested in the test had to go to Pakistan to take it. In the mid ‘90s, the FMGE was discontinued, and then visa applications started using the United States Medical Licensing Examination (USMLE). To take it, one had to go to Bangkok or Manilla to take it, and my dad chose Bangkok.

“Your dad had just received some more money and our options were to either get a car or have him take the USMLE,” my mom said. “A U.S. visa for us wasn’t a guarantee either, so it was a gamble.”

My dad ran out of money in Bangkok but still had a booked flight back home to Delhi. After passing the test in 1999, my parents flew to Baltimore, home of my dad’s first job in the U.S. Their first apartment was in the middle of the city, on the 23rd floor of Charles Tower. My mom stayed at home, since she hadn’t taken the USMLE and couldn’t practice as a doctor. My dad worked in his residency, taking long shifts before regulations on medical work hours were put into place.

My dad said he remembers how lonely my mom was. She would sit at home and wait for him, while studying for the USMLE. My dad promised her that if she would take the test, he would save up money for her to go home in India for some time. She did, and when she came back, she still missed home.

“When I was in India, I never even left the house for a night. But, then I came here. And on the 23rd floor you can imagine how homesick I was,” my mom said. “I would call home so much. Phone calls were 55 cents per month, and our phone bill was $200. Our rent was $540. We used to get Blockbuster credit because of how much I spent on calls.”

They furnished the house with a mattress and a small black table with four chairs. My dad remembers he got a TV for my mom; it was $50 with a single antenna, and they would mess around with it only to get a bad signal. But my dad felt happier here in the U.S. It became apparent the move was the right choice for him.

“I liked what I was doing, and I felt that professionally I was more satisfied,” my dad said. “The biggest challenge was that your mummy was home alone most of the time, and she missed India a lot.”

They did as much as they could. My parents moved out of that apartment after a short time. There was a lot of crime in that area, and some of the people around my parents told them to move out to another community. So, they moved, my mom carrying their luggage on a bus while my dad was at work.

My parents still remember the people who helped them out in the beginning. They moved to Baltimore because my mom was in contact with a few people there, but in the end, it was the community around them that supported my parents.

“My co-resident offered to lend me her car for the driving test,” my dad said. “It was a big deal.”

My parents used to travel to meet people they knew, such as those who also went to MAMC. Mostly, driving was their escape and relaxation.

“Every night, when [your mom and I] could, we would drive around for fun. The first time we went to New Jersey, we found an Indian channel on the radio. Your mom went crazy,” my dad said. “We didn’t have the GPS so we used to have a map open, and she [your mom] would always give the wrong directions.

My mom retorted that she gave those directions on purpose. They would go to places that would remind them of their home across the globe. My parents would watch Bollywood movies together, and my mom liked to go to Niagara because they had Indian food.

“We used to watch movies on Chotti Diwali [an Indian holiday], because new movies would come out in theaters then,” my mom said. “Once, everyone in [your dad’s] residency program watched it with us together. They cursed us out later because of how long it was.”

My parents laughed over these small moments, but my mom kept coming back to tell me they didn’t know how life was going to work out. She had a hard time trying to put how she felt at the time into words.

“You can’t really say anything about events that didn’t even happen or choices you never made,” my mom said. “There’s so much struggle, so you just don’t realize what’s happening in the first few years.”

Looking back, it may have seemed like a spontaneous decision, but it was rooted in a want for a better life. They both have built a second home here; yet, their attachment to the world they grew up in will never cease. My parents will always consider their life in India as the one that is truly theirs, seemingly separate from the struggles they had in the U.S.

“Overall, we feel that emigration was a good decision for us. We have no regrets,” my dad said. “Regardless, we would prefer to move back to our home country after retirement.”