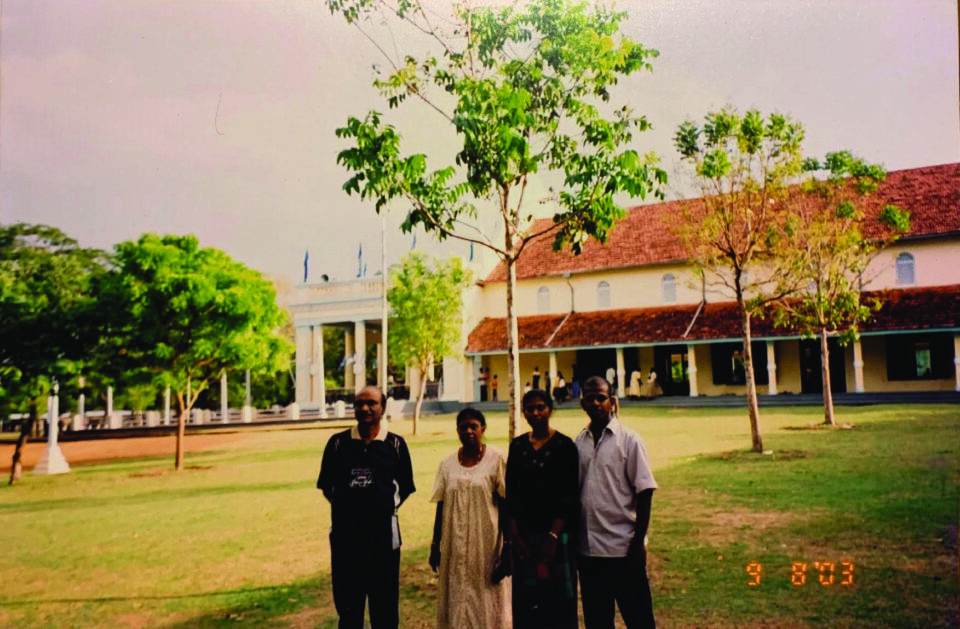 Although I claim to be more knowledgeable about Sri Lanka than my younger sister, becauseI was born in Sri Lanka and she was born in the U.S., most of my so-called experience comes through the eyes of my parents. Fondly referring to our homeland as the pearl of the Indian ocean, both my parents spent the majority of their lives across the globe, later moving to the U.S. in 2006, just two years after I was born.

My mom was born in Jaffna, a city off the northern coast of the island. She is a middle child, with one older sister and one younger brother, and grew up loving the seafood that came with living so close to the Indian ocean. My dad was born in Negombo, a city off the southwestern coast, but moved to Jaffna months after he was born.

Being the oldest of five kids, his childhood revolved around climbing palmyra trees and playing and fighting with his siblings. He said in this way, our childhoods were similar. He and his siblings, however, were less reliant on digital devices for amusement, mainly because the internet hadn’t yet become popular when he was young.

Both of my parents spent most of their early life within their tight-knit ethnic communities, growing up with their parents, siblings, extended family and neighbors. My dad attended primary and secondary school at Saint Patrick’s College in Jaffna, and continued his education through a bachelor’s degree in civil engineering in 1993 at the University of Peradeniya. My mom attended St. John Bosco’s School until fifth grade and then was accepted into Chundikuli Girls’ College after passing the fifth grade scholarship exam. Once she graduated from 12th grade, she took another national exam to determine what career path she would select, choosing to attain a medical degree in Sri Lanka.

During my parents’ pursuit of higher education, their families met and organized an arranged marriage, leading to their engagement in 2002 and their marriage ceremony 2003. My dad left Sri Lanka in 2005, one year after I was born, to study for his Master’s degree from the Department of Earth System Science and Policy at the University of North Dakota. Rather than moving all at the same time, my mom and I moved to North Dakota in 2006 after my second birthday.

Sri Lanka’s location just north of the equator creates an extremely tropical climate. My mom emphasized the difficulty adapting to such drastic change in weather, switching from an environment that remained humid all-year to a state that hit near and below zero temperatures during the winter months.

In terms of changes to their daily lifestyle, she said she missed foods not as readily available in the U.S. as they were in her home country. Being unable to find certain ingredients also changed what meals she could and couldn’t make.

Although the language barrier seemed daunting, both my parents said they didn’t struggle with using and understanding English rather than Tamil, their mother tongue. They both used English in much of their higher education and learned some of the language in primary and secondary school as well.

“In Sri Lanka, we grew up with our own ethnic group. We all spoke the same language, and had the same culture. Here, it was similar, so it felt like not that big of a difference besides the change in language,” my mom said. “But after you started going to school, we started seeing many people who didn’t share the same language with us, rather than the few we interacted with daily. Also, since we spoke [Tamil] at home, you were not able to pick up [English] that quickly.”

“…Since then I always remembered that here, you don’t need to stop trying new things or put yourself down even as you’re getting older.”

Once we picked up the language more easily, adjusting to life in the U.S. also ran much smoother. My mom went on to say living here taught her some lessons she was unsure she would have learned in Sri Lanka.

“Once, I met this woman, maybe around 70 years old. She came to tennis courts to play pickleball,” she said. “Actually that point I was astonished because back home in Sri Lanka, after living to 60 or 65, we stop outdoor activities and we just sit at home and enjoy the rest of our life, enjoy whatever comes. I still remember she told me, ‘okay, so you guys are coming to play tennis now and when you get older like me, you can play pickleball.’ Since then I always remembered that here, you don’t need to stop trying new things or put yourself down even as you’re getting older.”

Both my parents said they were grateful for the opportunities in the U.S. for themselves and our family. My dad said although there was more accountability for a person’s actions, rather than reliance on family as backup, it came with the benefits of more freedom overall.

In Sri Lanka, there are large ethnic inequalities. The majority of people there are from the Sinhalese ethnic group, while the Tamil community my parents grew up in are a portion of the minority. The Sinhalese held prejudices against the Tamil people, and did not provide fair or equal opportunities for them in terms of employment and general welfare. This led to a 26-year civil war beginning in 1983, where the youngest generation of Sri Lankan Tamils fought to attain equal rights, or a separation of state from the Sinhalese.

My dad was not an exception from these cultural inequalities.

“While I was in college, I was arbitrarily detained without cause just because I was a minority and I was considered a security threat. This was rampant in the public sector employment as well. However hard you worked, it was difficult to climb up with promotions,” he said. “In my first year in college when I went for my internship, my senior manager, who was Tamil, told me that after almost 25 years of commitment to his career, he was still just a deputy general manager. His juniors, who are from the majority, got all the promotions and were at the same status as him. At that moment I decided I would not become another person like him 25 years later, who was just upset and complained about his situation. So, here I am.”

Despite the hardships, my parents have never attempted to conceal their love for our home country. They both encourage my sister and me to embrace our cultural identities through language, family and food. My dad’s never-ending trove of stories about his childhood never fails to depict what my life would’ve been like if I grew up in Sri Lanka, but he also reminds me of the abundance of paths I can pursue in the U.S.

“Yeah, you’ve got to be creative. You have to work hard and be on top of things in order to be successful here,” he said. “But even though there are all sorts of issues here, too, if you work hard, I don’t think anybody can stop you from thriving.”