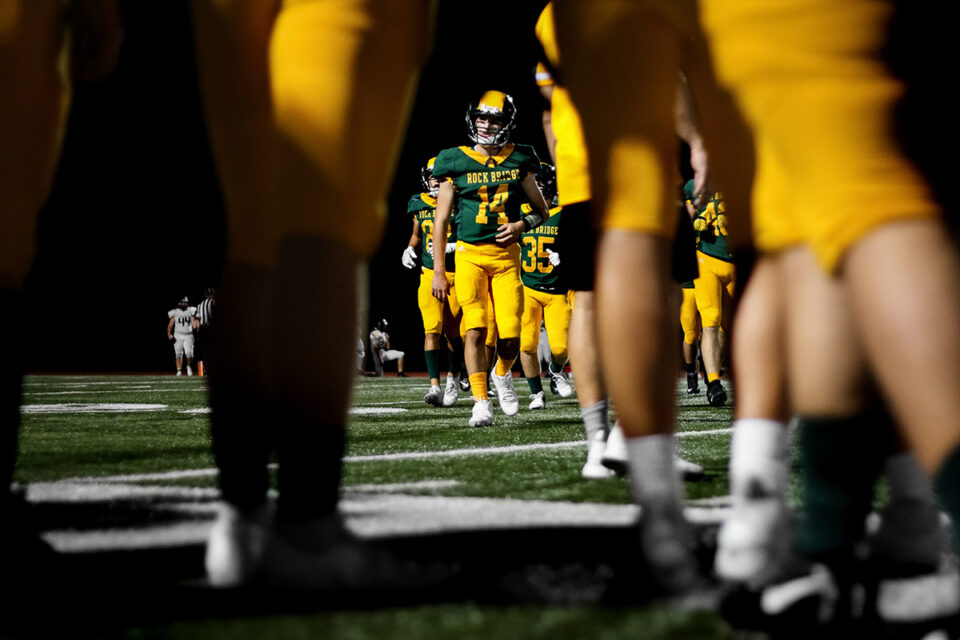 Sophomore quarterback Louie Scardina returning to the sidelines amid a change of possession. Photo by Desmond Kisida.

In the first home game of the 2021 football season, the Bruins handed Smith-Cotton High School (SCHS) a 50-0 loss, demonstrating a home field advantage. Coming off a tough loss to Staley High School (SHS) on Friday Aug. 27, the Bruins delivered a game full of great offensive and defensive plays in front of a roaring crowd, ending in a win for RBHS.

RBHS won the coin toss, giving SCHS the first possession of the game. After receiving a long kickoff from junior kicker Jack Bower, SCHS decided on a series of running plays to build momentum, but were quickly shut down on four straight attempts by the RBHS defense.

On the first offensive drive of the game, a long pass by senior quarterback Nathan Dent pushed RBHS downfield, where they quickly punched through the opposition’s defense for a touchdown two minutes into the first quarter. Soon a cycle was formed with the RBHS defense pushing SCHS off the field, and RBHS offense taking the ball downfield for a touchdown, leading to a score of 21-0 by the end of the first quarter.

Right guard, sophomore Noah Schondelmeyer said the team performed well on offense and defense, each enabling the other to do a better job.

“Both sides of the ball played really well,” Schondelmeyer said. “We were getting first downs almost every play and the defense was very good at turning over the ball extremely fast, so it was a great game for everyone overall.”

Outside linebacker, junior Aughust Pfitzinger said that the team practiced hard all week after their loss to SHS.

“Last week we were all over practicing and we all practiced pretty hard,” Pfitzinger said. “So overall we were very confident going into the game.”

RBHS continued their onslaught of high level play, running the ball more and kicking a field goal with six minutes and eighteen seconds left in the second quarter. The Bruins then scored yet another touchdown, solidifying their lead going into halftime at 31-0.

Going into the third quarter, RBHS received the ball and was able to drive for a touchdown but failed the extra point attempt with eight minutes and twelve seconds left on the clock. After much struggle, SCHS was able to reach their first, first down of the game. Yet with just thirty seconds left, junior safety Tomisaac Johnson snatched a throw by SCHS for an interception.

“They never gave up. Even down 50-0, they kept their heads up and kept playing. A lot of teams might have given up so that’s something to be proud of.”

Starting the fourth quarter, the Bruins were up 37-0 as the clock continued to tick. Even near the end of the game, however, RBHS poured on the offense, scoring two more touchdowns and bringing their final score to 50-0, effectively shutting out SCHS.

Head coach Van Vanatta said the team played well on Friday, and when they are doing their best, they can play closely against any team.

“Any win is a good win, since they are hard to come by,” Vanatta said. “[It] hopefully shows when we cut down our mistakes we can compete with anyone on our schedule.”

Pfitzinger said that despite the loss, the SCHS players kept good attitudes throughout the game.

“They never gave up. Even down 50-0,” Pfitzinger said. “They kept their heads up and kept playing. A lot of teams might have given up so that’s something to be proud of.”

How do you think the RBHS football team will perform this year? Let us know in the comments below.

Sophomore Josiah Anderson is a staff writer for Southpaw and Bearing News. He most enjoys fishing and hiking. In his free time, he likes to read, write, and play video games.