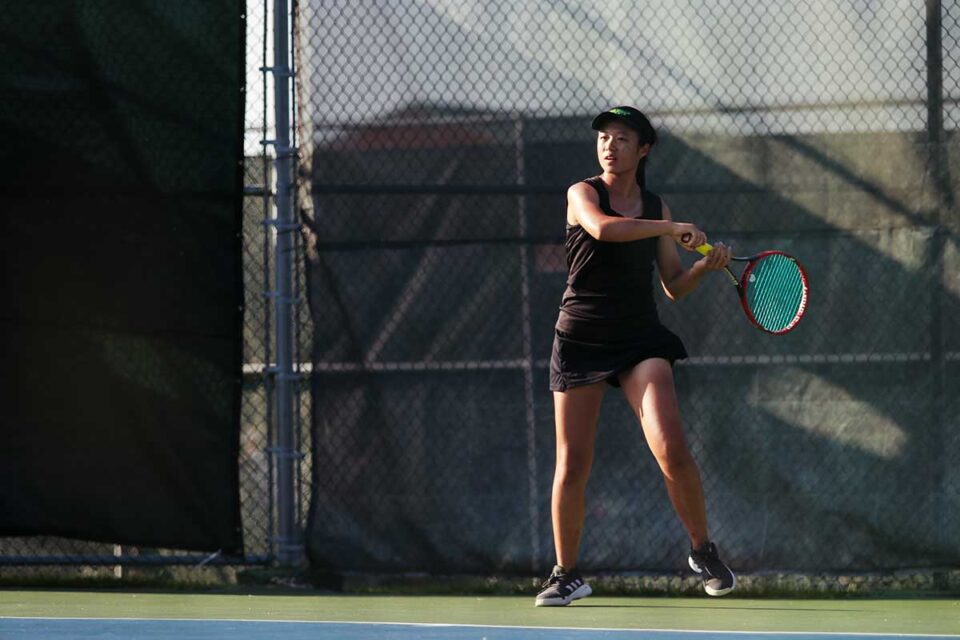 The RBHS girls’ tennis team pulled a clean victory against Parkway Central High School on Sept. 9, winning eight matches and losing one overall. Although their varsity line-up was not solidified going into the meet, the team won all three of their doubles matches and five out of their six singles matches.

Clinching the first round of doubles proved critical in giving the girls momentum going into the singles. Seniors Maggie Lin and Anjali Noel Ramesh dominated in their doubles match, ending with a score of 8-1. Abbie Sivaraman and Kinley Schade played their best doubles match so far this season, leading 8-2 as seniors on the team.

“I think we’ve all been working to improve our doubles, and it’s shown in the level of match play we’ve gotten,” Sivaraman said. “We hit the ball with conviction and put a lot of points away at net.”

Lin, Noel Ramesh and Sivaraman won their individual matches, scoring 8-0, 8-5, and 8-0, respectively. Despite mid-game play adjustments, Schade was also able to make a comeback in her singles, closely losing her final round with Parkway after a long match in the hot weather.

“I have played a lot of really long matches and it’s hard to keep going when I get really tired,” Schade said. “It’s really rewarding when you make a good comeback and win a long one.”

Since the start of the season, head tennis coach Ben Loeb said the players improved in playing more aggressively as well as the team’s third doubles showing stronger communication, coordination and strategy.

“I have played a lot of really long matches and it’s hard to keep going when I get really tired. It’s really rewarding when you make a good comeback and win a long one.”

Moving forward, Coach Loeb emphasized the importance of timing in a match with quick, effective attacks against opponents.

“We need to become better at handling pace at the net in doubles and in hitting overheads,” Loeb said. “We need to finish more points at the net.”

Last Thursday’s dual meet was the start of a series of matches spanning three days, including Mary Institute and Saint Louis Country Day School on Sept. 10 and schools Edwardsville and Fayetteville on Sept. 11.

“We moved up three levels in competition from Thursday to Friday,” Loeb said. “We have a good team, but against the top teams we need to learn to have more of a first strike ability and we need to improve in net play in doubles.”

Winning the meet against Parkway Central was essential in raising both confidence and endurance for the strong competition ahead. The team wants to use the emotional and physical capabilities developed during the dual meet to continue scoring victories for the more difficult matches to come.

“I think we should be proud of ourselves and how we competed,” Sivaraman said. “We should take that momentum into our next two matches where we face three solid schools.”

Did you watch the Girls’ Tennis team last weekend? Let us know in the comments below.

Sophomore Julia Kim is a staff writer for Southpaw and Bearing News. They are also involved in speech and debate, filmmaking, and play cello in chamber orchestra. During their spare time, he enjoys listening to music and watching movies as well as reading theory and writing.