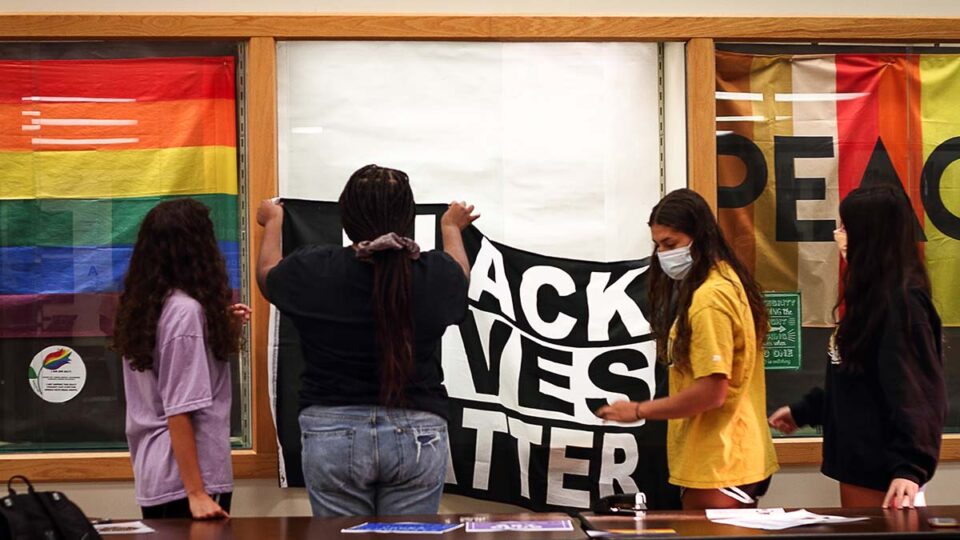 After a parent complaint reached the CPS superintendent’s office and a Facebook group also called upon the removal of the flag, it was taken down Aug. 27.

Mike Woods, RBHS home school communicator and MAC Scholars sponsor, informed members of MAC Scholars of the flag’s removal. He said students decided the flag should be put back up.

“If it has anything to do with faculty, then it can be deemed political. But students are allowed to have their own expression, their own ideas and their own opinions. So that is why we are able to have this flag hung up and it can stay up.”

“When the news came from the Board office to the principals’ and to our principal here at Rock Bridge, he [Principal Sirna] had to abide by the decision that had been made,” Woods said.  “MAC Scholars was very interested in putting it back up, but we had not yet had a meeting on how we were going to do that.”

Soon after the flag’s removal, Nelson also expressed interest in hanging the flag up again. She wrote a letter for other members of the Student Equity Coalition to sign and delivered it to Sirna for this purpose.

“We had meetings with Sirna just to talk about everything and then contacted different clubs’ leaders and their sponsors, just to make sure that it got hung back up,” Nelson said. “It was sponsored by so many different student groups from all across Rock Bridge that it just made it more inclusive.”

Many students were frustrated with the school’s removal of the flag, but in order for it to be put back up, a club had to sponsor the flag.

“If it has anything to do with faculty, then it can be deemed political,” Nelson said. “But students are allowed to have their own expression, their own ideas and their own opinions. So that is why we are able to have this flag hung up and it can stay up.”

CPS chief communications officer Michelle Baumstark included a statement on the situation in an email sent to CPS staff, stating “the district also has existing policies and procedures related to signage for activities and clubs and classroom instruction that it must follow.” The erection of signs at CPS schools is allowed only under the pretense of club-related activities, bringing RBHS clubs together to put the flag back up.

Underneath the flag, Woods said passersby can “see little banners of the different clubs here at Rock Bridge that support this.” He and other RBHS staff stood back and vacated the area so students could successfully hang the flag back up while following district policy. He was inspired by the initiative of RBHS students.

“You know, it’s a minor setback, but it’s a victory today because a student group felt the need for the flag to go back up, which was awesome,” Woods said. “It shows me that they’re willing to stand up for what they believe in. And they have a right to be heard.”

Rollison remarked on the involvement of different RBHS groups in this event and the significance of student unison in enacting change.

“Art Club is one of the many student organizations who came together to support replacing the Black Lives Matter display and recognize the importance of building a community where every student feels safe and knows that their life has value,” Rollison said. “It was important to send a message of unity and that we as students have the power to stand up for what we believe in and promote positive change at our school.”

How should RBHS respond to parent concerns? Let us know in the comments below.