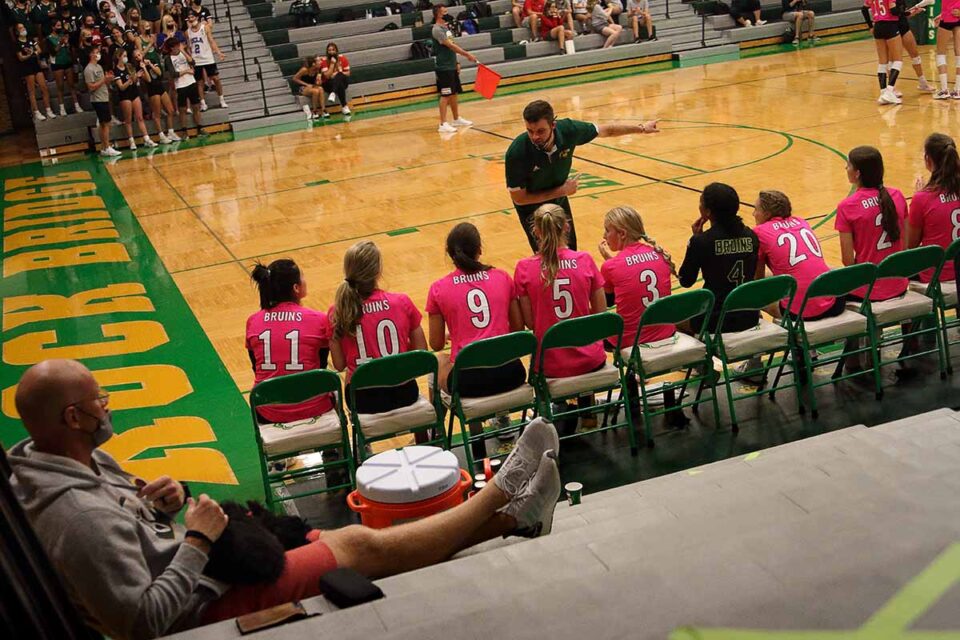 The team played strong throughout the entire game with a packed crowd and won all three sets. The players were prepared as they walked on the court to start the game. Junior Ella Swindle immediately dominated the court. She scored the first point in the first set and continued to play well throughout the rest of the game. She said the team had incentive to perform well in hopes of winning the 2021 Missouri State High School Activities Association state Championship.

“I thought the team did a great job of keeping our level of play [high] even though the competition wasn’t great,” Swindle said. “The team is very motivated by our goal of winning State. We realize that it has never been done before in [RBHS] history and that it is a tall task, however, we have the talent to do it.”

Recently hired head volleyball coach, Trevor Koelling prepared the team by talking to the girls about “controlling what they can” and allowing mistakes to happen.

“We focused on where our strong points were and tried to use those to our advantage every time.”

“We focused on where our strong points were and tried to use those to our advantage every time,” Koelling said. “We also have a team rule that once we go down to the locker room we have to focus and prepare for the game which really helps our mentality right before a match. Also the day before a match, we watch a game film of the match before and try to correct where we went wrong.”

With the help of Koelling, the team has a 22-3 win-loss record. Players like senior Emma Lea Benny believe maintaining control during the game is essential to perform well.

“To prepare for our game against Smith-Cotton the team really focused on discipline,” Benny said. “We wanted to make sure we would play our level of volleyball no matter who was on the other side of the net.”

The team was able to keep a high score throughout the entire game. All 16 players from the varsity team were able to play because of RBHS’s high point lead throughout the game.

“This game was great because we played an opponent with less talent than we normally face, so I was able to get a few [junior varsity] girls into a varsity match for the experience. We were able to play all 16 of our players and every lineup was successful which is very encouraging to see,” Koelling said. “I think this match allowed us to capitalize on points of emphasis from practice and really show off what we are capable of.”

Did you watch the volleyball game on Thursday? Let us know in the comments below.

Sophomore Zay Yontz is a staff writer for Southpaw and Bearing News. She is involved in speech and debate and enjoys cooking, listening to music and reading in her free time.